Back in the late sixties, our friend and client Henry James Korn wrote an experimental and formally innovative work of fiction entitled The Pontoon Manifesto.  It’s had various print incarnations, some better than others in terms of relaying the intended meaning of his experiment.

Forty-five years on, we are truly proud to present a new and unlimited edition electronic Pontoon powered by a web-based randomizer which reorders the paragraphs at the click of a button. This gives The Pontoon Manifesto new life in a technological form unavailable at the time of its writing.

For the Print Purists

In 1975, his experiment was reprinted by the poet Larry Zirlin as a limited edition artist book in the form of a deck of cards to be shuffled and read in any order.  This may be one of the best ways to read the manifesto, and limited copies of this original collector’s edition are still available — drop us a note if you are interested in acquiring a numbered/lettered and signed copy. Physical copies should also be available on Amazon.com shortly as well. 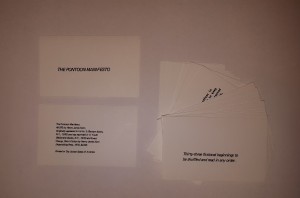 We would love to have your reviews and thoughts once you’ve had the chance to check out the new “manifesto.”  Feel free to post them on GoodReads.com at your leisure.  Additional information about The Pontoon Manifesto including selected exhibitions, selected collections, and its publication history can be found here: The Pontoon Manifesto.

‘Thirty-three fictional beginnings to be shuffled and read in any order?’  I did it and I’m hooked.
-Alexandra Garrett, NewLetters, Beyond Baroque Foundation Los Angeles, 1975

Korn’s persona is a latter-day Huck Finn on his raft riding out of yesterday into today, graduating from innocence to the no-sense world of Tanguy, Ernst, Dali and Kafka.  This post-McLuhan Shandyesque card-read, play-book  is elegant, whimsical, politically satirical and truly surreal.
-Arlene Zekowski, Small Press Review, Dustbooks, Paradise, California, 1975

The Pontoon Manifesto can be read as many ways as it can be shuffled, creating a new plot with every reading.  In trusting his reader to create the fiction, Korn appears to believe my mind contains as many interesting possibilities as his own.
-Tom Montag, Learning to Read Again: Some Notes on Eight Recent Books, Cat’s Pajama Press, Chicago, 1976

The Pontoon Manifesto electronic web edition was designed by Chris Aldrich of  Boffo Socko Books who deployed a web-based randomizer which reorders the paragraphs endlessly at the click of a button.