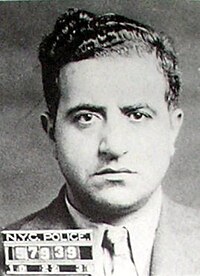 Albert Anastasia (born Umberto Anastasio, September 26, 1902 – October 25, 1957) was an Italian-American mobster, hitman and crime lord, and one of the most ruthless and feared organized crime figures in United States history. One of the founders of the modern American Mafia and the founder and boss of Murder, Inc., Anastasia was boss of what became the modern Gambino crime family. Anastasia is considered by the FBI to be one of the deadliest criminals of all time. According to former NYPD Detective Ralph Salerno, Anastasia murdered tens of thousands of people during his reign of terror, while former FBI Assistant Director James Kallstrom believes the number of people that Anastasia has killed is unquestionably in the thousands; however, the exact number is unknown.

Anastasia was unarguably the most dangerous and feared hitman of the Cosa Nostra's golden era, earning the infamous nicknames "The One-Man Army", "Mad Hatter" and "Lord High Executioner". Anastasia was also in control of the New York waterfront for most of his criminal career, including the dockworker unions.