Everyone has a bone to pick with existing social networks. There are plenty of legitimate concerns, but the fact is that social media has also been incredibly valuable for many people. If your business depends in large part on connecting with others or engaging with an audience, it’s hard to simpl...

The heading really says it all.
I’ve been spitballing with a few people about how to create alternate funding ideas including making smaller community-centric hubs and infrastructure to both center the smaller interactions as well as help create healthier funding centers for our technology. Smaller local news outlets and libraries are better places for these spaces to stem from in my opinion. Setting up these structures isn’t easy (or cheap) however.
As for the confusion on the IndieWeb pieces, you’re not wrong. The community knows this is an issue and is slowly, but surely working on it. Naturally it’s a slow process because it’s all volunteer driven, but we’ll get there.

IndieForums is a proof-of-concept site built around the IndieWeb. All content on this site (with the exception of /self/ posts) is generated through webmentions.

Congratulations on getting this up! Good to have an IndieWeb friendly forum out in the world.

Yes. Never really stopped. But still read a lot on Feedly. I think it's time for a renaissance, possibly connected to the indieweb movement.

Thank you @ChrisAldrich for giving these 2 pointers. I am excited to participate in the event; just 1 question though: how to RSVP yes? Checked and clicked a few links but couldn't seem to get it done

I’ll put your name on the list, and you can visit that page on the day for the video link to join via Zoom. No need to fuss with a “formal” RSVP unless you want to try it for fun. Incidentally your tweet which mentioned the event post has created an informal RSVP on the page already. 🙂

Most are logged into the system with their website which will give you a one-button RSVP link. However, most have actually RSVP’d on their websites and sent a webmention to that page for their avatars and details to show up on the page. (Here’s mine.) If you don’t have your webmention sender live yet, you can do it manually: https://telegraph.p3k.io/send-a-webmention.

If you want to go through the exercise and need some help, pop into the IndieWebCamp chat and we’ll help you get sorted.

I bought my first domain on the 15th of April 2000. Now, more than 20 years later, I have almost 30 domains to my name with a few expired ones in the rear view mirror. Not all those domains are for me, though. I have set up domains for projects as gifts to friends and family members. I’ve given domains for birthdays, Christmas and to celebrate the birth of a child. For some, I also host their sites, others their emails.

My first domain was to share teaching materials before the concept of Creative Commons was even conceived. Some domains were to help projects but most were about maintaining online identity. This session will outline the key lessons I’ve learned over the years about online identity, the technology required to maintain it and the knowledge, skills and mindset involved. It will cover:

• Key knowledge and skills required to own a domain
• Pitfalls and hidden difficulties with domain ownership
• Ways of leveraging a domain into a website or an email presence
• Changes in the processes and options over the last 20 years and future prospects
• Novel ways of hosting websites, emails and identities
• Dilemmas faced by individuals and institutions in maintaining online identities

Built on serverless infrastructure so its *trivial* to fork and customize. Costs pennies a month to host.

Compatible with @Firebase as a custom auth provider.https://t.co/6zjXkkTFEH

This is a fun looking little IndieWeb project with a blogging engine and reading functionality built right in. Can’t wait to see how it evolves.

While going through my Twitter archive, I realised several things which are going to greatly inform the way I write on the web in the future: While linklogging is fun, easy and in many ways the fabric that makes up the internet, it’s existence is fleeting. Maybe that link will remain valid for 10 ...

A lot of this resonates with me. On links, it is often the reason I was interested in it in the first place that’s the most important.

The nostalgia factor is very valuable to me, but it also means you need an easy means for not only looking back, but regular reminders to do so.

Owning your stuff: hopefully my stance on this is obvious.

I’m not sure I agree so much with the taxonomy stance. I find it helpful to have it for search and review, the tougher part is doing it consistently with terms that are important to you.

I do think folks have also conflated the generic ability to read RSS with the specific social networking features of Google Reader, so it’s hard to know which they say they’re missing.

I used to miss the reading/social aspects of GR until I switched to using my own website in combination with social readers like Aperture and Indigenous. (Aaron Parecki has a good overview of what it looks like; the space has grown quite a bit since his original post in 2018.)

I heartily agree with @waxpancake that the open web needs some better discovery options.

People write tweetstorms because they’re “easier” than whatever their blog setup is. And the constraints of 280 characters at a time makes for both careful sentence construction and flow.

But - then you’ve got this lovely writing that is trapped on Twitter. At best, you come back and copy / paste the tweets back into a blog post.

The idea is a Micropub enabled tweetstorm builder. You log into it with your Twitter account and with Indieauth so that posts end up as one big blog post on your own site, but are sent to Twitter as a tweetstorm / collection.

Who would want to use this and why?

Anyone that wants to compose tweetstorms in a richer environment while also having it post to their own site.

Create a Twitter collection — I actually don’t know what all the features of collections are. Tweetbot supports this.

Boris, I love this idea of this and how it could work.

If you haven’t come across it, ThreadReaderApp does something similar to this but in a reverse syndication instead of the method you’re describing. It allows one to publish a thread on Twitter and then use ThreadReaderApp to roll the thread up and post a copy of it to one’s website that supports Micropub. I’ve written a bit about how it works here: boffosocko.com/2020/05/28/threadreaderapp-micropub-to-blog/

I’d love to see something more like what you’re describing.

Another interesting option for this that has a lot of the functionality you’re looking for is Kevin Marks’ Noter Live. I know he’s considered adding Micropub functionality to it. I suspect he’d be very open to anyone who’d like to add that or other refinements via pull request to GitHub – kevinmarks/noterlive: A tool for indieweb live noting (aka live tweeting/live blogging). It does post live threads to twitter and currently gives the output as raw HTML that one could cut/paste into their site.

communities disappearing from self-hosted forums and even Livejournal to places like Tumblr and Twitter, and to a lesser extent Reddit, was a move from spaces we controlled to spaces designed to control us

of course, this happened for good reasons - accessibility first and foremost. it allowed many new communities to form, too. if we want to have control, we need to ensure access too.

phpBB is terrible but it does what it wants to do. same with Discourse, though some design decisions are... odd. mastodon, on the other hand, does _not_ do what it tries to do - build communities around microblogging

what we need is to build federated forum software with two-way syndication - accessible from the Fediverse, from Twitter, from Tumblr, even from IM platforms.

for example - these posts syndicate to Twitter, but comments don't syndicate back, which means I have to maintain a real presence there.

If you like, you could use Brid.gy to get comments and reactions back from Twitter with Webmention support for your site. I’ve outlined some of it for how I’m doing it on WordPress, but the idea is very adaptable for any website out there, and there’s a growing list of pre-existing code one could leverage.

(Hint: this also works for other common social platforms which Bridgy supports. As examples, I’ve got two-way communication set up between my site and Github and Mastodon just to name a few, so I don’t need to actively visit those sites on a regular basis. I pipe most of the content into a social reader like Monocle or Indigenous and reply directly from there.)

Webmention can be used as some of the community glue for things you’ve mentioned in your thread as well. As an example, I can post on my website and syndicate that content to IndieWeb.xyz (using Webmention) where others can discover it (perhaps by category) and interact with it using their own websites. If they have Webmention support as well we can have a site to site conversation that could potentially all be mirrored on IndieWeb.xyz which acts as a conversation and discovery hub.

This ecosystem is slowly growing and flourishing, but we still need work on making it all easier and more accessible as well as helping to guard against potential abuses and bad actors to make things safer for bigger public communities at scale. (I notice you’ve got a great site, that touches on and covers some of these topics like security and identity.) 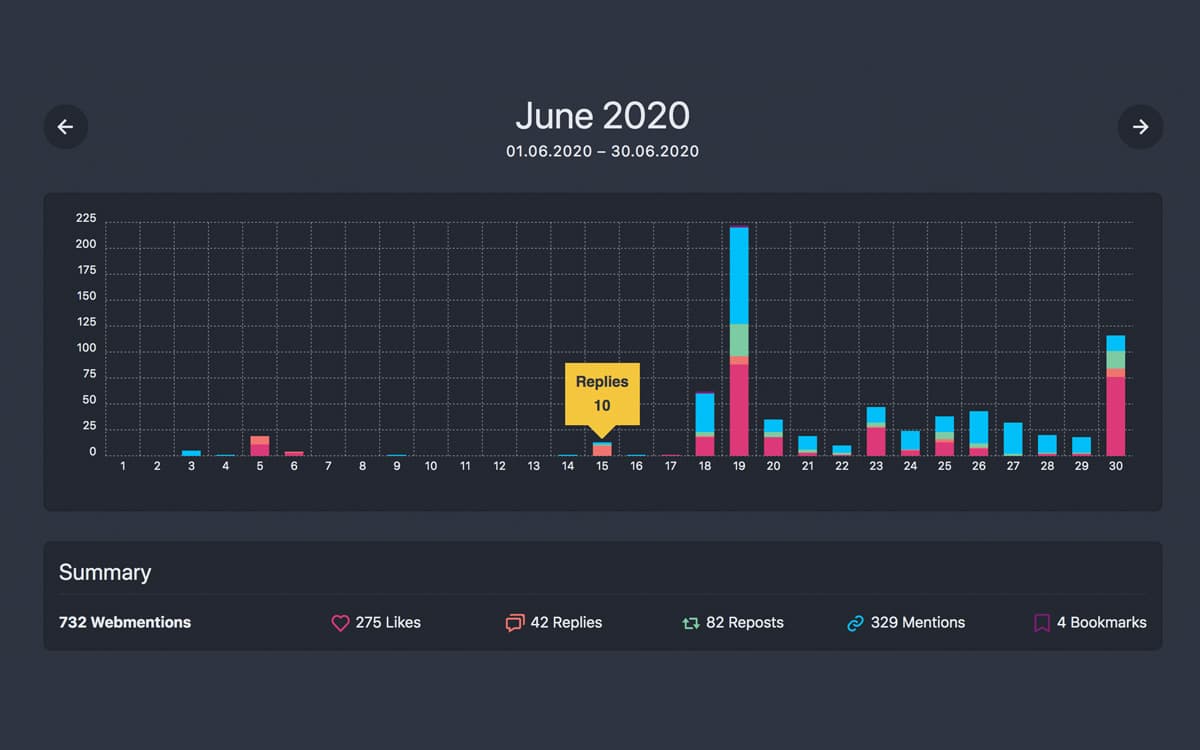 I built a tool to analyze incoming webmentions. This new side project generates monthly reports to see how and where content is mentioned.

This may be the first version of someone specifically doing analytics of Webmention on their own website. Very cool!

Something that I haven’t seen anywhere on the Indieweb: is there a simple guide for services which let you replace Twitter, Facebook, Insta, etc etc with more open alternatives? Preferably written with non-technical users in mind?

Micro.blog is one of the best IndieWeb friendly services out there to replace some of these platforms with a user friendly set up. https://indieweb.org/Quick_Start delineates some other services like i.haza.website, Pine.blog, and Typlog which have some great features too depending on what you’re looking for. If you’ve got someone with some modest technical chops to run a small service for you and some friends, Known can be an awesome option too.