@abidnev@mastodon.social I like the look of https://fedipress.com/ and where it’s going. Your tutorial is excellent, but omits one small piece of useful architecture for discovery. You might consider adding the NodeInfo plugin to your WordPress/Fediverse toolbelt.

One of its benefits is to help WordPress sites show up in Fediverse databases like https://the-federation.info/wordpress, which should also give you a broader listing of the (currently 405 nodes with 9273 users) WordPress instances in the Fediverse for advertising on your site.

While the new community members section of the IndieWeb newsletter is just a tiny subset of people who are joining the IndieWeb movement by actively adding themselves to the wiki, it’s been encouraging to see expanding growth both here and in the broader web (even Tumblr) and Fediverse space since Musk announced the acquisition of Twitter.

Here’s to more positive growth to a healthier and happier online social experience. 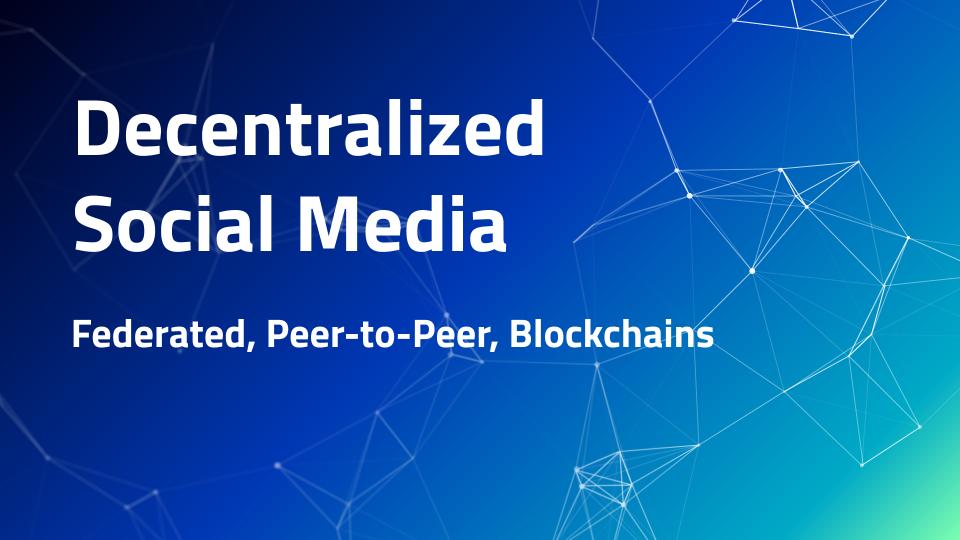 We agree. Much work has been done and some of the fundamentals are in place. So on January 21, 2020 the Internet Archive hosted “Exploring Decentralized Social Media,” a DWeb SF Meetup that attracted 120+ decentralized tech builders, founders, and those who just wanted to learn more. Decentralized social media app builders from London, Portland and San Francisco took us on a tour of where their projects are today.

Something important to notice about this article. Not a single person here is linked to using their own website, or via a link to their presence on any of their respective decentralized networks. All the people whose names are linked are linked to on Twitter. All of the people who’ve written pieces or articles linked to in this piece are writing on Medium.com and not on their own sites/platforms. How can we honestly be getting anywhere if there isn’t even a basic identity for any of these people on any of these decentralized networks? At least most of the projects seem to have websites, so that’s a start. But are any of them dogfooding their own products to do so? I suspect not.

I’ll circle back around shortly to watch the video of the event that they recorded. I’m curious what else they’ve got hiding in there.

Interestingly, I’ll note that it appears that my site will at least somewhat federate with the Internet Archive’s as they support pingback. (Great to see technology from almost 20 years ago works just as well as some of these new methods…)

Graber helped us understand the broad categories of what’s out there: federated protocols such as ActivityPub and Matrix; peer-to-peer protocols such as Scuttlebutt, and social media apps that utilize blockchain in some way for  monetization, provenance or storage. ❧

Missing from this list is a lot of interop work done by the IndieWeb over the past decade.
Annotated on February 03, 2020 at 06:48PM

Thought leader and tech executive, John Ryan, provided valuable historical context both onstage and in his recent blog. He compared today’s social media platforms to telephone services in 1900. Back then, a Bell Telephone user couldn’t talk to an AT&T customer; businesses had to have multiple phone lines just to converse with their clients. It’s not that different today, Ryan asserts, when Facebook members can’t share their photos with Renren’s 150 million account holders. All of these walled gardens, he said, need a “trusted intermediary” layer to become fully interconnected. ❧

I’ve noticed that @janboddez has a plugin that will do this for a variety of Fediverse instances including Mastodon:
https://github.com/janboddez/add-fediverse-icons-to-jetpack

I’ve been thinking through how to leave Facebook’s Instagram service since June, when I finally deleted my central Facebook account. This should be easy, because I don’t post that much on Instagram, but it always seems hard because it’s the best user experience (IMO) on mobile for writing a ...

An interesting method of leaving Instagram. I still read content there, but I had used dsgnwrks-instagram-importer by Justin Sternberg to rescue all of my Instagram posts back into my WordPress site since it gave me a huge amount of control over porting over the metadata as well. I’m noticing that the repository lists it with a warning “This plugin has been closed as of August 10, 2019 and is not available for download. Reason: Licensing/Trademark Violation.” though I can’t imagine what that would have been for unless Instagram is trying to nudge Justin out. (There’s a copy of the plugin on Github for those who may still want it.) Other than a small issue I’d seen with some emoji in Instagram, the plugin always worked like a charm for me.

Prior to that I’d always been a big fan of Aaron Parecki’s OwnYourGram, though I understand that Instagram was limiting his crawler, so the service may not be taking new accounts.

While I know some of the people behind Pixelfed and generally trust them, I don’t think I would use it as a solution unless I was standing up my own instance of the service. Far too many Mastodon instances have gone down for me to trust a particular sites’ admins. Apparently Mastodon has made it easier to move from one instance to another, but I’m not sure how this may or may not apply to Pixelfed.

Presently, my money is on Matthias Pfefferle’s ActivityPub plugin which adds support to a WordPress site to act as a stand-alone member of the Fediverse. While it’s beta software, it works fairly well and is evolving impressively over the past year or so. I suspect that photo support will improve to put it on par with solutions like Pixelfed, particularly when combined with the ease of use of some of the Micropub photo posting applications that are out there.

I’d feel remiss if I didn’t mention that another option for exiting Instagram (or at least backing it up to your own site even if you don’t leave completely) is to try Beau Lebens’ Keyring Social Importers plugin. I know a few who have used and liked it for its Instagram and other social silo support.

I’m sure there are other methods out there as well and many might be found on the IndiwWeb wiki pages for “Instagram” or “photo”.

Node list and statistics for The Federation and Fediverse

A decentralized video hosting network, based on free/libre software

Since version 1.0 has been released last November, we went on improving PeerTube, day after day. These improvements on PeerTube go well beyond the objectives fixed during the crowdfunding. They have been funded by the Framasoft non-profit, which develops the software (and lives only through your donations). Here is a small retrospective of the end of 2018/beginning of 2019:

A user-friendly, emancipatory and ethical tool for gathering, organising, and mobilising.

so everyone pays for their own website (domain, hosting, support, etc.)?

Sure why not? Don’t you imagine that if multiple millions left Facebook for managed hosting that the cost of $5/month would potentially drop to $1/month or less via competition?

I actually kind of understand this—only because I think Mastodon is at odds with the Indieweb.

I don’t think that what Joe is seeing is an anti-IndieWeb thing. It is something we’ve seen before from a handful of instances and will assuredly see again.

The other example of this behavior I’ve seen was when Greg McVerry, a college professor and member of the IndieWeb community, tried to join a Mastodon instance that was specific to researchers and professors in higher education. Sadly he found out, like Joe, that syndicating content from other locations was not acceptable there. As I recall, they also required an automatic content warning on almost everything posted to that particular instance which seemed an additional travesty to me. I think he ultimately joined mastodon.social and found he didn’t have any similar issues there and anyone who wanted to follow him from any other instances still could. I’m sure he can provide some additional details and may have posted about it sometime in the summer of 2018 when it happened.

The tough part is that each instance, though federated among many others, can have its own terms of service and set up. Some instances can be and certainly are run by their own tyrannical administrators, and I suppose that it’s their right since they’re paying for the server and the overhead. The solution is to do some research into some instances and find one that isn’t going to ban you for what would otherwise seem like average use to most. I’ve found mastodon.social to be relatively simple in its terms and its massive size also tends to cover up a lot of edge cases, so you’re unlikely to run into the same problems there. (It is also run by the creator of Mastodon, who has generally been IndieWeb friendly.)

The issue Joe has run into also points out a flaw of the overall Fediverse in that just like each real-world country can have its own laws and there is a broader general international law, the international laws aren’t as well codified or respected by each individual country. When you’re operating in someone else’s country, you’re bound to follow their local laws and even customs. Fortunately if you don’t like them there are lots of other places to live. And this is one of the bigger, mostly unseen, benefits of the IndieWeb: if you have your own website, you can create your own rules/laws and do as you please without necessarily relying as heavily on the rules of others.

I’ll note that some in the IndieWeb (Aaron Parecki, Ryan Barrett, Mathias Pfefferle, Jacky Alcine, et al.) have been playing around with or thinking about adding the ActivityPub protocols so that their own websites act as stand-alone members of the Fediverse. Since I know Joe has recently moved to WordPress, I’ll mention that there are two separate projects to help WordPress sites federate:
* ActivityPub plugin for WordPress from Mathias Pfefferle
* Bridgy Fed from Ryan Barrett

Naturally neither of these (yet) supports all of the protocols so some functionality one would find on Mastodon won’t necessarily work, but I suspect that over time that they eventually will. It’s been a while since I tried out BridgyFed, but I’ve had the ActivityPub plugin set up for a bit and have noticed a lot of recent work by Mathias Pfefferle to use it for himself. I still have to tweak around with some of my settings, but so far it provides some relatively useful results. The best part is that I don’t need to syndicate content to Mastodon, but users there can subscribe to me at @chrisaldrich@boffosocko.com, for example, instead of @chrisaldrich@mastodon.social. The results and functionality aren’t perfect yet, but with some work we’ll get there I think.

Good luck finding (or creating) an instance that works for you!

Testing out some ActivityPub settings on my personal website.
h/t @chrisaldrich@boffosocko.com

Good evening, I have some thoughts that are kind of meta to the fediverse and apply into society more broadly. One public toot, then I'll thread
So... I get torn between two principles & I think they're a reason why shared solutions like masto are so important.

Principle 1: own your shit / pay for the shit you use

Principle 2: there should be plenty of low-barrier & "free" spaces for people to congregate in some way.

This is tied to my being a librarian tbh.

Some interesting thoughts that mix some IndieWeb ideas and libraries.

True to the spirit of an open source community, and one which supports others of like mind, We have joined with the group on the internet called the Fediverse; for those who might not be aware, that is, the group of independent social networks running interoperable software (Mastodon, and others. we... 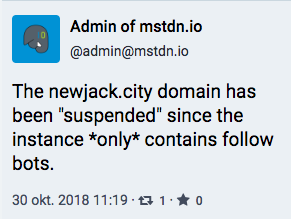 The Twitter-like platform Gab has been forced offline, as their payment providers, hosting provider and domain provider all told them their business was no longer welcome. The platform is home to people with extremist views claiming their freedom of speech is under threat. At issue is of course wher...