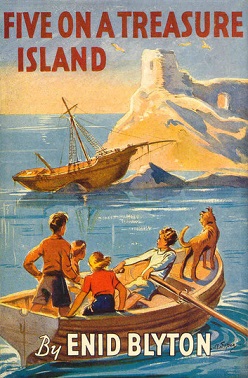 The Famous Five is a series of children's adventure novels written by English author Enid Blyton. The first book, Five on a Treasure Island, was published in 1942. The novels feature the adventures of a group of young children – Julian, Dick, Anne and Georgina (George) – and their dog Timmy.

The stories take place in the children's school holidays after they have returned from their respective boarding schools. Each time they meet they get caught up in an adventure, often involving criminals or lost treasure. Sometimes the scene is set close to George's family home at Kirrin Cottage in Dorset, such as the picturesque Kirrin Island, owned by George and her family in Kirrin Bay. George's own home and various other houses the children visit or stay in are hundreds of years old and often contain secret passages or smugglers' tunnels.

Referenced in Songlines chapter 1 as a series of books the author read when she was younger. I’ve downloaded a copy of the first in the series to check it out. Sounds a bit like Hardy Boys, but set in England/Wales.