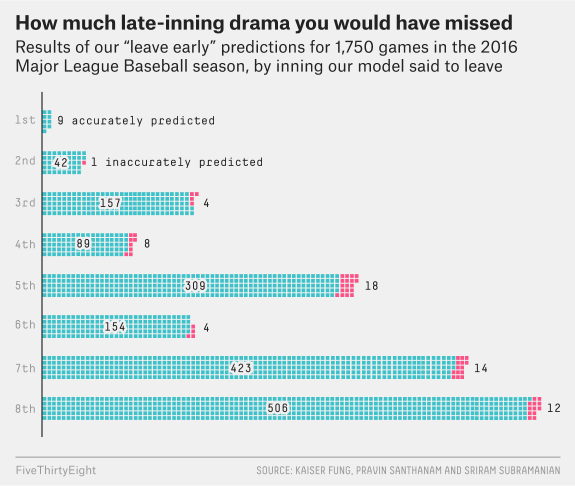 According to our statistical model, based on 2010-2015 regular season inning-by-inning scoring data,3 you should leave after the sixth inning if the leading team is ahead by four or more runs. There is a less than 5 percent chance that the other team will deliver a miracle comeback. If the run differential exceeds two at the top of the ninth, it’s safe to head to the exits. What about blowouts in the first inning? If your time is that precious — and you’re willing to view the money spent on tickets as a sunk cost — our advice is to rev up your car’s engine if the leading team jumps ahead by six runs or more. In developing the cheat sheet, we tolerate a 5 percent false positive error rate. Take the 2016 season as an example. The impatient fan who took our advice would have left early in 1,750 games, but in 61 of those games, the eventual winner came from behind to win, and so the fan missed out on some later-inning excitement. For that season, our model attained an accuracy rate of 97 percent.

We really need the other bound as attempting to see the exciting last minute come backs are some of the best parts of baseball!