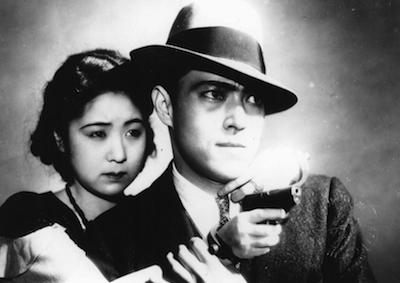 During the silent film era in Japan, which extended into the early 1930s, film screenings were accompanied by live narrators, called benshi. In the industry’s early years, benshi functioned much in the way scientific lecturers did in early American and European cinema, providing simple explanations about the new medium and the moving images on screen. Soon, however, benshi developed into full-fledged performers in their own right, enlivening the cinema experience with expressive word, gesture and music. Each with their own highly refined personal style, they deftly narrated action and dialogue to illuminate—and often to invent—emotions and themes that heightened the audience’s connection to the screen. Loosely related to the style of kabuki theater in which vocal intonation and rhythm carries significant meaning and feeling, benshi evolved in its golden age, between 1926-1931, as an art form unto itself. Well-established benshi such as Tokugawa Musei, Ikukoma Raiyfi, and Nakamura Koenami were treated as stars, reviewed by critics, featured in profiles (in 1909, the first issue of one of Japan’s earliest film journals featured a benshi on its cover) and commanded high salaries from exhibitors. The prominence and significant cultural influence of benshi prompted the government to try to regulate their practice, instituting a licensing system in 1917 and attempts were made to enhance their role as “educators” through training programs overseen by the Ministry of Education. The benshi were not without controversy, however. While some contemporary critics argued that the benshi were essential to differentiating Japanese film culture from the rest of the world’s output, others argued that the benshi, along with other theatrical elements, impeded the artistic and technical evolution of Japanese cinema into a fully modern art form. Benshi did vigorously resist the coming of sound to Japanese cinema and the practice continued, though with increasing rarity, into the sound era. The art, today, is carried on by a small group of specialized performers who have been apprenticed by the preceding generations of benshi, creating a continuous lineage back to the original performers.

The Archive and the Tadashi Yanai Initiative for Globalizing Japanese Humanities are pleased to present this major benshi event in Los Angeles which will afford audiences a once-in-a-lifetime chance to experience this unique art form in all its rich textures. Pairing rare prints of Japanese classics and new restorations of American masterworks, this weekend-long series features performances by three of Japan’s most renowned contemporary benshi, Kataoka Ichirō, Sakamoto Raikō, and Ōmori Kumiko. Trained by benshi masters of the previous generation, they will each perform their unique art live on stage in Japanese (with English subtitles) to multiple films over the course of the weekend. Every performance and screening will be accompanied by a musical ensemble with traditional Japanese instrumentation, featuring Yuasa Jōichi (conductor, shamisen), Tanbara Kaname (piano), Furuhashi Yuki (violin), Suzuki Makiko (flute), Katada Kisayo (drums).

I’ve always loved old school screenings of silent films, but I’ve never experienced benshi. This sounds like it could be pretty cool and definitely unique as its own artform.
Posting....