I’m curious about looks like an LA County Sheriff’s helicopter hovering over the Eaton Canyon/Mt. Wilson area for the past 10 minutes. #Earthquake or #Fire related?

A helicopter buzzing a palm tree

At roughly 4:09pm I noticed an incredibly low flying Los Angeles County Sherrif’s Office water drop helicopter buzz our neighborhood nearly missing the neighbors’ 50ft palm tree. There had been helicopter noise for about 10 minutes prior, so this got my immediate attention. I went outside to see a copious amounts of white smoke coming from the neighborhood just about 2 blocks north of the house.

I put on my shoes to see where the fire was originating and walked up the street.

A satellite map of the exact location of the blaze.

Arrival at the Scene

I walked up to the rough scene (or as close as I could get given the situation and the smoke) at about 6:22. Traffic is being stopped on Altadena Drive from roughly Canyon Close Dr. up past Roosevelt Ave.

Firefighters are connecting hoses at Canyon Close Drive and running them up the street. I suspect this is to potentially defend the homes on the top side of the street because the fire and certainly the smoke are close enough to warrant it.

Batallion Chief arriving at the scene just a few minutes after I do.

Smoke is getting thicker as I get closer to the scene of the fire.

Firefighter connecting hose at the closest hydrant, potentially to protect nearby homes.

The fire is apparently down in Eaton Canyon

7 fire trucks, 3 helo, 4 police and battalion 4 are on scene with ways drop via helo at Henninger trailhead in #altadenacanyonfire. pic.twitter.com/7YIObyMJsa

Altadena Dr. South of Roosevelt is closed to traffic for #altadenacanyonfire

As I was walking up to the scene until about ten minutes later there were about 4 or 5 water drops by LA County Sheriff’s Helicopters.

Scene on the street

Now up to 14 fire trucks and 2 battalion cars responding to #altadenacanyonfire pic.twitter.com/CeEZm3Xo2W

Water drops seem to have stopped for the moment and groups of firefighters are arriving to descend down into Eaton Canyon to finish off the blaze. By rough count there were about 50-60 firefighters down in the canyon and roughly another 30 or so additional firefighters and other first responders up on the street providing support.

Group of ground firefighters arrive to battle the blaze on the ground.

They’re heading half a block up to the Henninger Trail Head to descend down to the scene of the fire.

It’s now 4:43 pm and water drops have stopped for the past 10 minutes or so. It’s now roughly 45 minutes after the firefight started. Here are some pictures from the vantage point just above the location of the fire just a few feet away from the canyon edge. Based on my guestimate the fire took up approximately 2-4 acres of space which was primarily dry scrubbrush and several trees in the middle of the arroyo.

on the North side of Altadena Drive, to get a better view of the scene.

Chainsaws, shovels, and picks in use to knock down the last of the fire.

Firefighters putting out the last of the blaze.

View down into the canyon

Reporting live from the scene

With things beginning to look like they’re winding down, and with a clearer view of the scene now that the smoke has abated significantly I take a moment to do a quick video recap for the viewers at home.

Altadena Dr. north of New York closed to through traffic for at least another hour. #altadenacanyonfire

Things appear to be under control by about 5pm, so I headed home. Stopping to ask local police how long the street is likely to be closed through rush hour.

I arrive at the house and toss in the coordinates of the fire into Google Maps to discover the center of the fire was 2,426 feet from the house (roughly 2 blocks away.) It was easy to get exact coordinates given the size of the trees in the fire zone and the specificity of the images in Google’s satellite view. We definitely dodged one today, particularly given the dryness of the last year and the high winds we’ve seen all afternoon.

It also dawns on me that I took a hike through this exact portion of Eaton Canyon yesterday morning. My checkin at the time captures a photo across the canyon almost 30 hours before the incident. I’ll try to get another sometime this week to provide a direct comparison.

Looks like the fire is almost out just in time for the 5pm evening news. @CBSLA @ABC7 @NBCLA @KCBSKCALDesk @FOXLA

Apparently the forest fire started around 4 am on Mount Wilson and has been burning relatively steadily since.

View of the Wilson Fire from East Pasadena on Woodbury.

Mount Wilson from Woodbury and El Molino in Pasadena

View of the fire at 8:54am from my back yard. (It’s more difficult to see from here despite it being far closer.)

Wilson fire at 8:54am from my front yard. It’s originating just behind the peak behind the palm tree.

I’ve got a great view from my office window of helicopter water drops.

This isn’t the closest fire to the house–that award goes to a medium sized brush fire about 8 doors down when I lived on Adams Hill in 2012, which was out in just a few hours–but it is the closest and the largest thus far. While it would take me about 3.5 hours to hike to the location of the fire, it’s because it’s located on a mountain and would take some winding mountain paths as well as a 4,700 foot climb. Sadly, most everything between us and the fire is all dry brush.

Fortunately today it’s not as hot or as windy as it has been here for the past month. Typically the winds have been to the North West this month, which would potentially serve to protect the house. The fire isn’t very close to residential neighborhoods (ours is the closest though), but there is an estimated $500 million in infrastructure and assets at the top of the hill as it is the home of the Wilson Observatory as well as a multitude of broadcast equipment for all of the major LA television and several radio stations.

Since at least 9am, I’ve been seeing a rotation of at least three helicopters and a large plane (747?) doing water drops on the hillside to battle the fire. Some of the photos above have these aircraft visible.

I still vividly remember the massive Station Fire in this area from August 2009 that still stands as one of the nation’s largest and significantly threatened the Observatory at the top of the hill above us. I was in San Diego the day the fire started and still remember the massive pyrocumulus cloud that I could vividly see the entire drive back home to Los Angeles.

Sadly, site deaths (thanks FriendFeed) have not preserved the photos, but here are a few tweets almost a week apart about the original:

View of Mt. Wilson (Station Fire behind it) from Rose Bowl prior to UCLA home opener. [pic] http://ff.im/-7ICWM

4:00 am Fire reported
8:00 am 26 acres burning and 0% contained
9:00 am the blaze had burned about 30 acres and and was 5 percent contained, according to the U.S. Forest Service
4:00 pm No visible smoke apparent from the Pasadena side facing North, but the fire is still blazing
9:00 pm No visible fire from the Pasadena side still, but fire is still at 30 acres and 25% containment

Firefighters have reached 25% containment on 30 acre #WilsonFire. Work will continue through the night. pic.twitter.com/qOQ6m6WeyB

A #MD87 #airtanker quickly climbs over #MtWilson after a #retardent drop at the #WilsonFire 10-17-17 #POTD #AVGEEK pic.twitter.com/OKGiNB4oj9 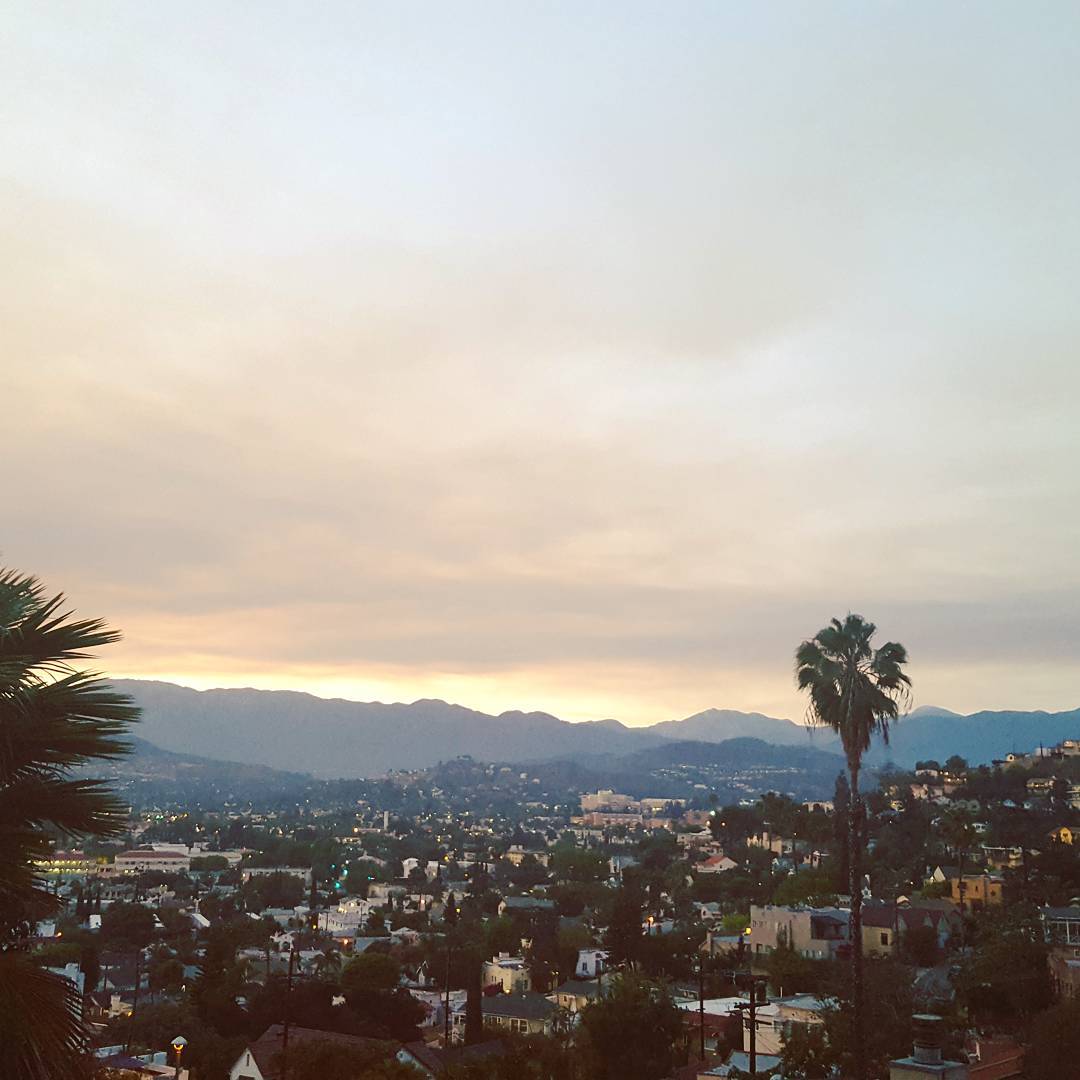