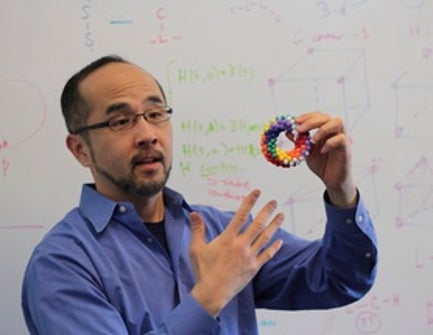 I need to remember to subscribe to this podcast…

There is a proof for Brouwer's Fixed Point Theorem that uses a bridge - or portal - between geometry and algebra. Analogous to the relationship between geometry and algebra, there is a mathematical “portal” from a looser version of geometry -- topology -- to a more “sophisticated” version of algebra. This portal can take problems that are very difficult to solve topologically, and recast them in an algebraic light, where the answers may become easier. Written and Hosted by Tai-Danae Bradley; Produced by Rusty Ward; Graphics by Ray Lux; Assistant Editing and Sound Design by Mike Petrow and Meah Denee Barrington; Made by Kornhaber Brown (www.kornhaberbrown.com)

I had originally started following Tai-Danae Bradley on Instagram having found her account via the #math tag. Turns out she’s burning up the world explaining some incredibly deep and complex mathematics in relatively simple terms. If you’re into math and not following her work already, get with the program. She’s awesome!

While this particular video leaves out a masters degree’s worth of detail, it does show some incredibly powerful mathematics by analogy. The overall presentation and descriptions are quite solid for leaving out as much as they do. This may be some of the best math-based science communication I’ve seen in quite a while.

I must say that I have to love and laugh at the depth and breadth of the comments on the video too. At best, this particular video, which seems to me to be geared toward high school or early college viewers and math generalists, aims to introduce come general topics and outline an incredibly complex proof in under 9 minutes. People are taking it to task for omitting “too much”! To completely understand and encapsulate the entirety of the topics at hand one would need coursework including a year’s worth of algebra, a year’s worth of topology including some algebraic topology, and a minimum of a few months worth of category theory. Even with all of these, to fill in all the particular details, I could easily see a professor spending an hour at the chalkboard filling in the remainder without any significant handwaving. The beauty of what she’s done is to give a very motivating high level perspective on the topic to get people more interested in these areas and what can be done with them. For the spirit of the piece, one might take her to task a bit for not giving more credit to the role Category Theory is playing in the picture, but then anyone interested is going to spend some time on her blog to fill in a lot of those holes. I’d challenge any of the comments out there to attempt to do what she’s done in under 9 minutes and do it better.