In the previous episode, I talked to Phil Howard of Michigan State University about concentration in the food industry. Afterwards, I realised I had been so taken up with what he was telling me that I forgot to ask him one crucial question.

Is there any effect of concentration on public health or food safety?

It seems intuitively obvious that if you have long food chains, dependent on only a few producers, there is the potential for very widespread outbreaks. That is exactly what we are seeing in the current outbreaks of dangerous E. coli on romaine lettuce and Salmonella in eggs. But it is also possible that big industrial food producers both have the capital to invest in food safety and face stiffer penalties when things go wrong.

Are small producers and short food chains better? Marc Bellemare, at the University of Minnesota, has uncovered a strong correlation between some food-borne illnesses and the number of farmers’ markets relative to the population.

Phil thinks one answer is greater decentralization. There’s no good reason why all the winter lettuce and spinach in America should come from a tiny area around Yuma, Arizona. Marc says consumer education would help; we need to handle the food we buy with more attention to keeping it safe. Both solutions will take quite large changes in behaviour, by government and by ordinary people.

Right now, it probably isn’t possible to say with any certainty whether one system is inherently safer than the other. But even asking the question raises some interesting additional questions. If you have answers, or even suggestions, let me know.

I can’t help but think about analogizing the mass production and distribution of food to that of social media (again). Replace food producers with social media and you’ve got large mega-producers like Facebook and Twitter at one end and smaller scale indie producers at the other. Surely outbreaks of issues with democracy, bulllying, racism, doxxing, etc. will happen all around, but when they happen on the larger platforms, then far more people are affected.

From an economic standpoint it would be nice to have more significant studies to see what the overall pieces of large and small producers are (as well as for the distribution piece too). What is the ultimate equilibrium point for overall cost versus public health? What would it look like theoretically? 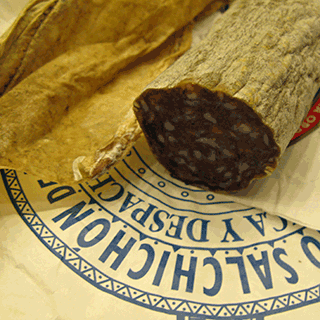 Among the more miraculous edible transformations is the one that turns raw meat, salt and a few basic spices into some of the most delicious foods around.

Time was when curing meat, especially stuffed into a casing to make a sausage, was the only way both to use every part of an animal and to help make it last longer than raw meat. Done right, a sausage would stay good to the next slaughtering season and beyond.

The process relied on the skill of the sausage-maker, the help of beneficial bacteria and moulds, the right conditions, a great deal of patience, and sometimes luck. Luck is less of a factor now, because to keep up with demand the vast majority of cured meats are produced in artificial conditions of controlled precision. Here and there, though, the old ways survive. Jan Davison spent months touring the sausage high-spots of Europe looking for the genuine article, and shared some of her favourites at the Oxford Symposium on Food and Cooking last year.