How is it that I didn't know about IndieWeb? https://t.co/JG6uQXGTnN

Probably the same reason you didn't know about WebRing.

Nope, I knew about WebRing! I'm that old!

What about IndieWeb + WebRing? https://indieweb.org/indiewebring

This might seem a little weird, but I'm trying to get back into using an RSS reader as an alternative to just relying on Twitter, so if you have any "weblogs" or sites you think I should add please hit me with them here -- odd, personal, insightful etc.

Discovery can definitely be a bear. Interestingly I came to your tweet through a handful of related blogposts via a feedreader from a random OPML file, so apologies for the late reply.

I keep an old school blogroll, but it got so big I made it an entire page. It’s split out by a few broad categories, but there are OPML linked files by category at the bottom to let you follow it all or pick your poisons. Hopefully you’ll find some fun and interesting gems hiding in there.

You might find some interesting feeds by clicking around within Dave Winer’s http://feedbase.io/ which will uncover some interesting active feeds. Best yet, it has lots of OPML files everywhere so you can quickly follow a lot.

Matthias Ott’s post Into the Personal-Website-Verse was at the top of Hacker News earlier this week. Both his post and the HN post have lists of people with websites that could be interesting and useful to follow for voices on the web.

You also might take a look at some of the details and resources on the discovery, blogroll, and even webring pages within the IndieWeb wiki. Not to be missed is Kicks Condor’s hrefhunt. Andy Bell also had a project to highlight personalsit.es.

In a somewhat related question, but from the other perspective (especially for journalism), I’m curious if you have any thoughts on: How to follow the complete output of journalists and other writers?

Are you a member of the IndieWeb Webring? Today I added a page for Terms of Use and Frequently Asked Questions!

Let’s say I wanna bring back webrings. How should I build it? First communities are gonna be #a11y, #PerfMatters, #CSSGrid, and #BoyBandWebmasters. (ICYMI: Webrings were curated communities with dope badges that you could explore with simple `< prev` and `next >` links.)— Tatiana Mac (@Tatiana... 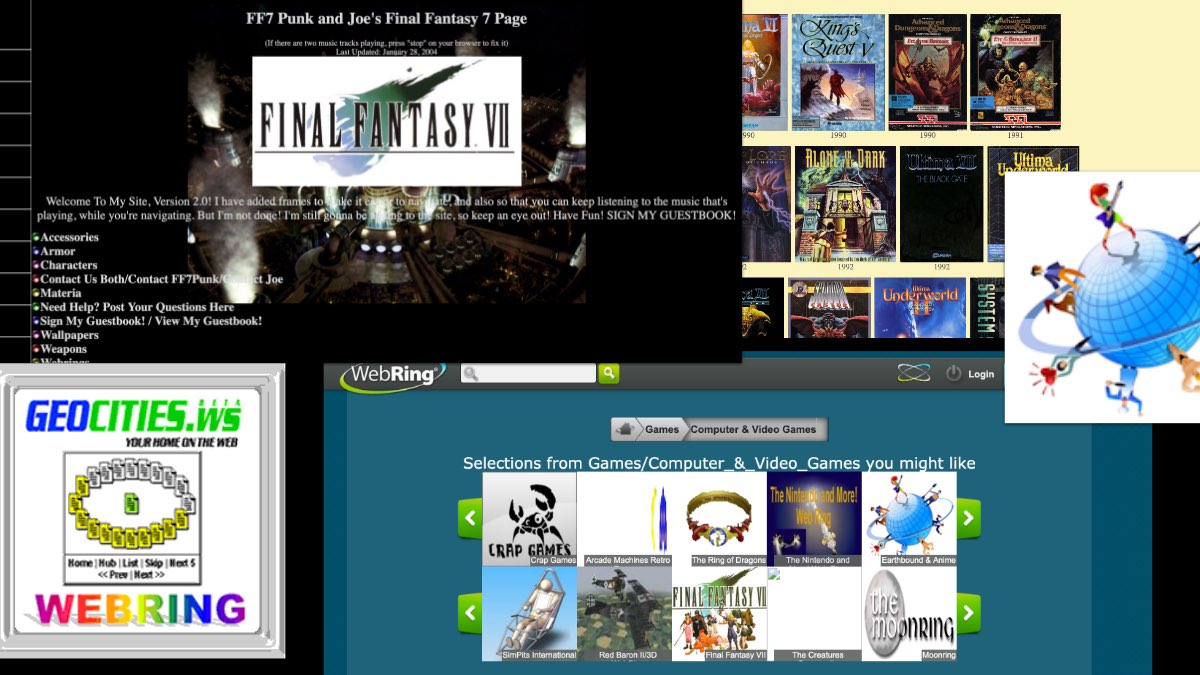 In the days before the web was mainstream, it was a place of creation. First for education, then for every random idea that any creator had! As the web transitioned from a network of educational institutions to the consumer force it is today, the early adopters were technologists... AKA geeks!

And I thought it was a pretty tiny space?! I’m glad to hear that there are others out there thinking about webrings again.

Personal sites are awesome, so this site was built so we can all discover each others. All the links are by folks that want to share their site with the world.

If you want your site to appear on here, go ahead and submit it on GitHub, or drop me an email.

I just ran across this interesting version of a directory which is being built based on a GitHub repo and deployed to https://personalsit.es/.

It’s built by Andy Bell who has been building his own website and is at least IndieWeb aware. I’ve added the example to the IndieWeb wiki page for directories. While interesting and useful, like some of the other directories I’ve seen floating around, there is a small hurdle that one needs to be able to fork a GitHub repo, edit it, and send a PR to be included, though I do like that he has an email option to bring the technical hurdle down. The other benefit is that it allows people to modify or delete their data as well. I do like the decentralized nature of of it, but I wonder about scale and search-ability.

I can’t help but wonder about building a similar directory site that aggregates its data by Webmention and uses the h-cards from websites to automatically update itself. Naturally having an OPML file(s) (think various versions that are sortable using tags/categories) or some other exportable and/or subscribe-able ability for feed readers would be highly useful.

In addition to resources like chat-names, Indie Map‘s list, as well as some planets, OPML resources like my own IndieWeb list, and the IndieWeb web ring, this could be another interesting directory creation method for IndieWeb-specific websites.

First, thank you for bringing this to my attention.  I have listed NowNowNow in the Hyperlink Nodes Directory as a niche directory. Second, Yes!  This is exactly what I’ve been yammering on about with decentralized search (or decentralized disco...

It seems like @glitch has the ability to fill that void

Eh, I'd rather enjoy building my own :)

That's fair. I was thinking Glitch would work as a place to build/host a webring and allow others to remix it as desired.

Yes! We’d love to be a home to the webrings people build :)

For inspiration: using @glitch our friend @schmarty has built an #IndieWeb ring to link people’s personal websites which dovetails on your prior idea.
Many on the ring are developer related btw.
https://indieweb.org/indiewebring

I tried to recommend #IndieWeb technologies to those affected by a recent Tumblr policy change. But many I talked to claim that recommendation is the whole draw of silos, and IndieWeb's lack of a recommendation engine is a deal breaker.

Because of the decentralized nature of the IndieWeb, it’s most likely that more centralized services in the vein of Indie Map or perhaps a Microsub client might build in this sort of recommendation engine functionality. But this doesn’t mean that all is lost! Until more sophisticated tools exist, bootstrapping on smaller individually published sorts of recommendations like follow posts or things like my Following Page (fka blogroll) with OPML support are more likely to be of interest and immediately fill the gap. Several feed readers like Feedly and Inoreader also have recommendation engines built in as well.

Of course going the direction of old school blogs and following those who comment on your own site has historically been a quick way to build a network. I’m also reminded of Colin Walker’s directory which creates a blogroll of sorts by making a list of websites that have webmentioned his own. Webrings are also an interesting possibility for topic-related community building.

Since Tumblr is unlikely to shut down immediately, those effected could easily add their personal websites to their bios to help transition their followerships to feed readers or other methods for following and reading.

Of course the important thing in the near term is to spend a moment downloading and backing up one’s content just in case.

This reminds me of these “useless web” sites—this being the primary one—that have managed to stay very popular. (A lot of YouTubers make videos of themselves clicking through this site and I often see kids at school using the site.) And it’s basically a webring. But it’s not a code-based...

This is Part II of my series on the Death of Webrings.  Part I is here. For this article I am going to use two examples.  I want to make it clear that I am not picking on the example rings, their creators or their intended uses.  I do want to point out what I see as flaws in their model that unle...

Summary: David Shanske and I recap the recent IndieWeb Summit 2018 in Portland Oregon including recent developments like microsub, readers, Vouch, and even the comeback of webrings!