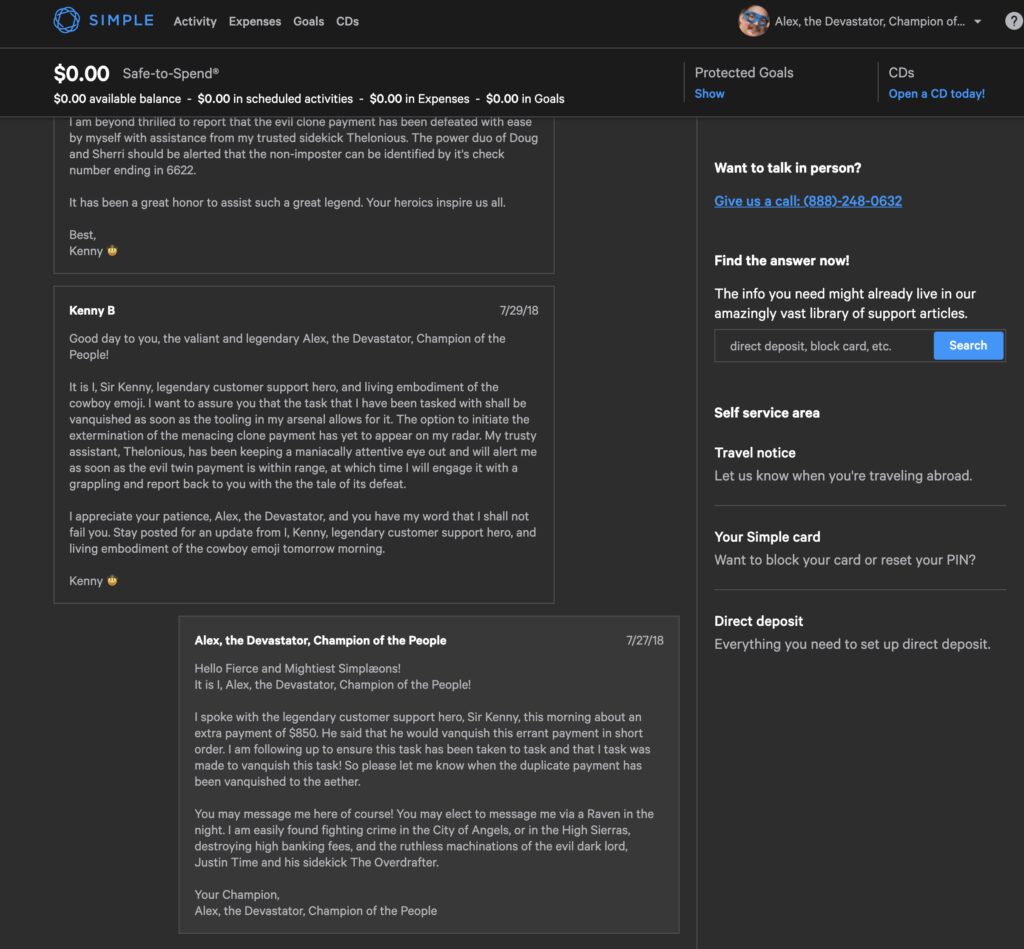 Have you ever wanted to write a love letter to your bank? No? Well, you’re a fucking nincompoop. Then how do you explain this?

employer: can you explain this gap in your CV
me: yes. you see, it was then that i carried you
employer:
employer: i don't think,

Twenty-something: A time in one’s life when it’s passingly acceptable that most of one’s dishware be of the plastic souvenir sort.

“Look ma! They stack AND I get cheaper refills.”

Thirty-something: A time when one has decommissioned all of one’s souvenir cups only to replace them with twice the amount of mismatched children’s sippy cups and plastic-ware.

Fourty-something: A time to help a new budding teenager begin their own addiction to plastic souvenir cups.

“This dinosaur cup has such an awesome swirly straw and it glows in the dark!”

“My grandmother was dead serious,” he said one day, sitting on his couch. “Her sense of humor was a secret.  ❧
— Gil Scott-Heron

When Fletch finds a wallet with $25,000 in cash inside, he doesn’t realize it’s the last piece of good luck he’s going to see for a while. Because when he calls in to the News-Tribune, he discovers a story he’s written is causing quite a sensation, and not the good kind. He might just be out of a job permanently.

If Tom Bradley, the chairman of Wagnall-Phipps and one of Fletch’s principal sources, and not incidentally, the source of his paper’s embarrassment, is dead, who’s been signing his name to company documents, and why doesn’t the company treasurer seem to know? If he’s alive, how come his widow, Enid, has Tom’s ashes on the mantel?

Fletch may have more questions than answers on his hands, but he knows he’s a pretty good reporter, and if he’s going to get his reputation back, not to mention his job, he’s going to have to get to the bottom of more than one mystery.

This didn’t have as much of the biting humor as others in the Fletch canon or as much interesting character development or motivation. This was a bit more more up-the-middle in terms of plot, though the twist at the end was relatively well foreshadowed yet still surprising, particularly for the time frame in which it was written.

Fletch’s romantic interest Moxie was quirky, but didn’t do very much for the plot. His quest within the story was fairly straightforward, but wasn’t very well motivated from an internal perspective given his lackadaisical viewpoint in life and his general inability to afford his situation.

The finding of the $25,000 was an interesting opening, but sadly and quickly took a back seat in the plot. Given subsequent events, it could have played a better tangential role as a more integral B-plot. The final wrap up in the closing scenes was very unsatisfying for our viewpoint of Fletch as a hero and could have had a better twist. I’m getting the feeling that Mcdonald is still coming into his own at this point in his career and that the success of the 1984 film version of Fletch had a more significant influence on subsequent character development.

Most surprising was that the major plot twist occurred in a book in 1981, making it far more prescient of American culture to come in the new millennium. Barring the differences in the current state of journalism, this plot would still easily fit into the zeitgeist today from a cultural standpoint.

Given that the series is set in Los Angeles, I was curious to see if Tom Bradley, the dead character that motivates the plot, bore any resemblance to long time Los Angeles Mayor Tom Bradley. The real Bradley had been mayor for nearly 8 years (of an eventual 20 year reign) at the time the book was written, but I couldn’t discern any direct political satire in the naming of the character, though my knowledge of early 80’s Los Angeles politics is sketchy at best.

As a fledgling reporter, Fletch is doing more flailing than anything else. That and floating around from department to department trying to figure where he fits in. His managing editor’s got him pegged for the society pages, but the kind of society Fletch gets involved with is anything but polite. His first big interview, a millionaire lawyer with a crooked streak and an itch to give away some of his ill-gotten gains, ends up dead in the News-Tribune’s parking lot before Fletch can ask question number one. So Fletch ends up going after the murderer instead, and ends up learning a thing or two about crime and punishment. At the same time, he’s supposed to be covering (or maybe uncovering) a health spa that caters to all its clients' needs, and gets hired as a very personal trainer. Never mind that he’s supposed to be getting married at the end of the week; Fletch has a few other engagements to take care of first.

I don’t remember the original Fletch (book) having the awesome biting, wry humor I found in this which is more reminiscent of the adapted feature film version. But it’s a hilarious little romp of entertainment. While not as tightly crafted in terms of plot as I remember the introductory book, which I read more than 25 years ago, it was terrifically enjoyable from start to finish.

The Rio Olympics reminded me that I’d gotten Carioca Fletch to read back in the late 80’s and never got around to it, so I thought I’d come back and revisit the series. This certainly didn’t disappoint, so I’ll be delving back through the rest to fill in some entertainment in the late end of the summer. Since I couldn’t get my hands on the second in the series from a publishing chronology, I thought I’d read them in the series timeline order instead. (Or as closely as I can from the perspective of obtaining them in this order.)

I read an e-book version of the text which was fair obviously an OCR’ed version of an earlier paperback version. There were a handful of egregious spelling errors and typos that should have been fixed, but fortunately the quality wasn’t too horrific. Hopefully the quality of OCR is maintained or improved throughout the remainder of the series.