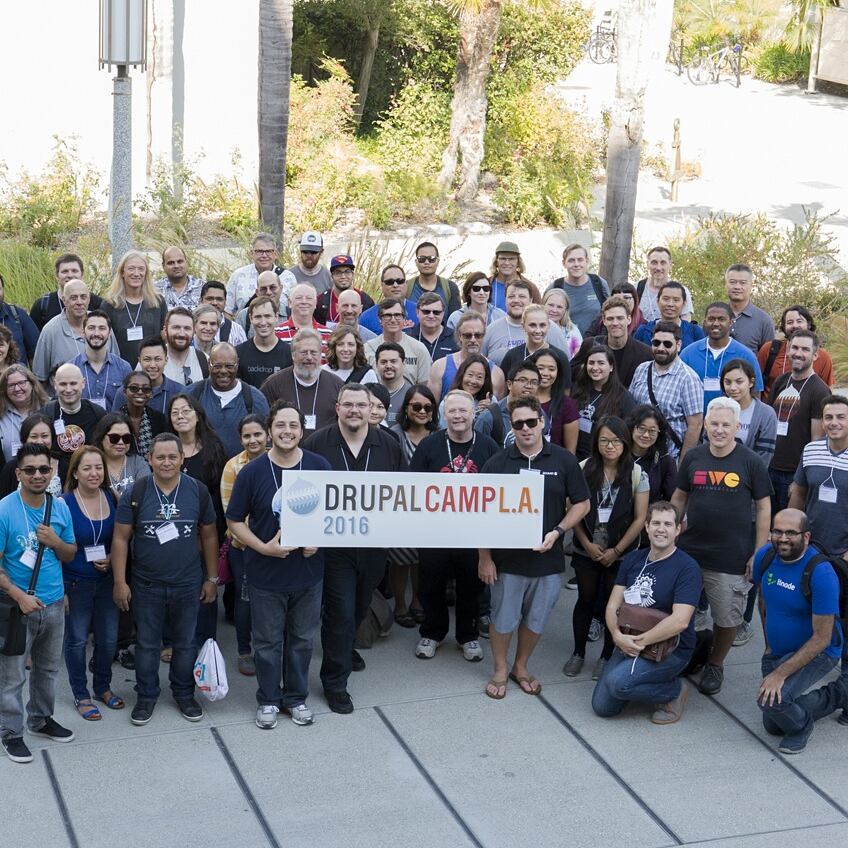 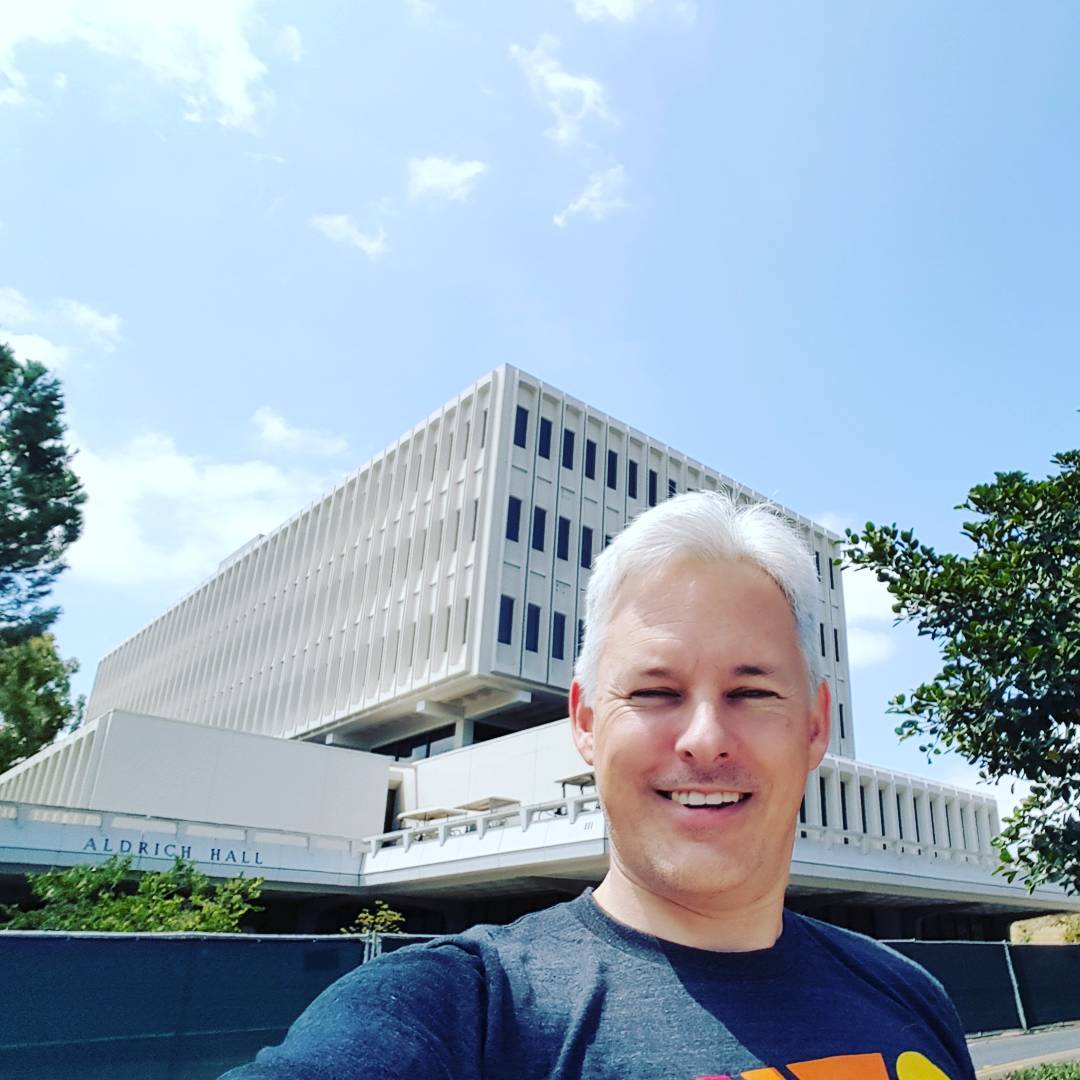 Many know of my love for libraries, but Aldrich Hall is my favorite! UC Irvine

As a pseudo-birthday present this weekend I attended both days of WordCamp Orange County 2016 at UC Irvine Applied Innovation.

The camp sold out in just hours a month and change ago, in part because it was limited to about 200 people given the fantastic space provided by UC Irvine’s Advanced Innovation. There aren’t many spaces one could go with such spectacular amenities and support in addition to a huge plethora of screens, recording equipment, and audio/visual supplements. Thanks for hosting us Applied Innovation!

Sadly the limited space meant that some people missed out, and the most unrepresented group was likely new users who may not have heard about it in time to get tickets. However, this didn’t mean that anyone else was underrepresented: there were attendees of every ability, age (10 months to over 90), race, sex and creed. I was honestly astounded by the diversity of people in attendance.

One of the best programming decisions was having food trucks show up to cater lunch, which kept everyone close and socially engaged rather than dispersing everyone to the wind by means of forcing outside food options.

Sadly, even knowing that Sundays are always slower than Saturdays, there were 2-3 empty rooms with no sessions at all on Sunday afternoon. I wish there had been some type of offering to  assist in putting together impromptu sessions or BoF sessions in these empty rooms. Alternately doing a beginner build track on Sunday and releasing “Sunday only” tickets might have been interesting and also better utilized the space.

Below are some thoughts on the individual sessions I attended. Most should be on WordPress.TV shortly and nearly everyone was posting slides.

This was a great quick introduction to most of the basics of WP Core and at just about the right time as I’ve been wanting to delve more directly into portions for a few projects. I’d definitely recommend the slide deck once it’s posted. This was one of my favorite sessions of the weekend.

This was one of the more entertaining sessions and had more conversation back and forth than any camp session I’ve ever attended. Sadly it stayed to the basics and in a room which seemed to have some more advanced participants, I wish it had gone further.

This was mostly what I expected, but included some additional tips that I didn’t know existed. In particular, knowing that I can provide formatting for others when they oEmbed my site is something I’ll have to look into.

Getting Started With SVGs For WordPress Theme Building by Jacob Arriola

I’ve played a bit with SVG’s but hadn’t delved into them very significantly. This was a good overview/crash course on some of the particulars.

This was a nice start to some intro information on talking about design patterns, but I would have preferred something at the intermediate or advanced level. In particular, it made me consider some quirky potential new visual grammars for mobile use (particularly in advertising). It also inspired me to think about creating a disorenting experience built on the visual/time grammar of the movie Inception.

Aaron was a fun and very dynamic speaker who obviously truly loves his topic. This was by far the best session I attended over the weekend. I want to try to get Elastic Search and ElasticPress set up on my site soon as it looks like what modern search should be on a website.

Using WordPress as an App Framework by Nathan Tyler

I’m somewhat shocked I’d never thought of doing this myself before, but just knowing the concept exists is more than half the battle. The sad part is that it sounds like for half the stuff you get for free, one needs to rebuild or re-engineer something else to get it working.

Andy is a practicing physician and a great WordPress “hobby-ist” who drove in from Palm Springs to give a great overview of the philosophy of Open Source and a broad range of tools used to help further that goal. One can’t help but be affected by his enthusiasm.

For a session meant to be primarily entertainment, I was actually surprised to learn about coding/development by hearing a panel of others critique four plugins. Condensed down, this could have been a session on the intangible things one would want to think about before building a plugin.

A Developer’s Guide to Support by Thomas Patrick Levy

Everyone can be put into a better mindset to help others. This was a great presentation for just that.

Because one just can’t get enough, I can’t wait to attend WordCamp LA on September 10th & 11th at Cal State University Los Angeles.

Since they’ve already made a Call for Speakers for the LA camp, I’ve already submitted the following talk application which focuses on the IndieWeb:

The IndieWeb is a people-focused alternative to the “corporate web” which has recently been covered in Wired, Fast Company, The Atlantic, The New Republic, Newsweek, and Slate. It encourages everyone to own their own data/content, be better connected to engage with everyone, and provide users with more control of their content and identity online. With the rise of social media silos everyone is seemingly incentivized to split up their online identity to participate in multiple various communities and a variety of platforms which are often bought out, shut down, or simply disappear, very often taking users’ data with them.

Why not allow your own WordPress site to truly be your primary hub online? Post your content on your own site/server so that you not only own it, but then, if you choose, syndicate it out to social media networks in a native and simpler fashion to take advantage of their network effects and engagement. Even better, new web specs like WebMention from the W3C (essentially a universal/internet-wide method of @mention) allow you to easily bring back comments, likes, and similar data back to your original post as native comments. You can now truly own all of the data and subsequent related data (comments) you place on most major social networks.

In this session we’ll briefly cover the basic history and philosophy of the IndieWeb movement before moving into more advanced topics like microformats, WebMention, IndieAuth, micropub, and a growing wealth of related tools which will be of interest to developers and designers alike. While primarily geared at individual users, these philosophies and techniques can be of huge value to writers/authors, bloggers, podcasters, and even businesses for drastically improving their reach and marketing efforts online while simultaneously saving them time and effort.

I spoke to a number of people over the weekend about some IndieWeb concepts and basics, but for those who can’t wait for more details, I’m happy to discuss more of the specifics at anyone’s leisure. If you’re really chomping at the bit, I’ll be at the WordPress Pasadena Meetup tonight and hopefully be setting up a Homebrew Website Club meeting in the LA area sometime in the next few weeks in anticipation of IndieWeb Camp Los Angeles in November.

Some thoughts and commentary on the camp this past weekend