Directed by Bill D'Elia. With Dulé Hill, Allison Janney, Joshua Malina, Janel Moloney. A nuclear device is tested in the Indian Ocean, but none of the known nuclear powers will claim responsibility, leading to the possibility of a terrorist group holding missile tests. Vice President Russell, heretofore dismissed by west wing staff as a joke, a four-term congressman alleged to be securely in the pocket of a large Colorado mining company, recalls a junket he'd taken early in his ...

One of my favorite episodes. The Chris Aldrich episode.

Directed by Alex Graves. With Stockard Channing, Dulé Hill, Allison Janney, Joshua Malina. When five crew members of an airborne Thunderchief are shot down by North Korean jets near the hostile country, President Bartlet dispatches a Navy SEAL team to retrieve them.

Directed by Alex Graves. With Stockard Channing, Dulé Hill, Allison Janney, Joshua Malina. A documentary-style look at the day in the life of press secretary C.J. Cregg on a day that turns out to be anything but normal due to a FBI/terrorist standoff.

Directed by Jessica Yu. With Dulé Hill, Allison Janney, Joshua Malina, Janel Moloney. A Supreme Court Justice dies, forcing the administration's hand on picking a desirable replacement who can be confirmed by a hostile Congress.

Directed by Lesli Linka Glatter. With Dulé Hill, Allison Janney, Joshua Malina, Janel Moloney. Press leaks lead to the revelation that former VP John Hoynes is about to release a tell-all book about the administration.

An OERxDomains21 Gasta session by Sarah Honeychurch and Wendy Taleo. 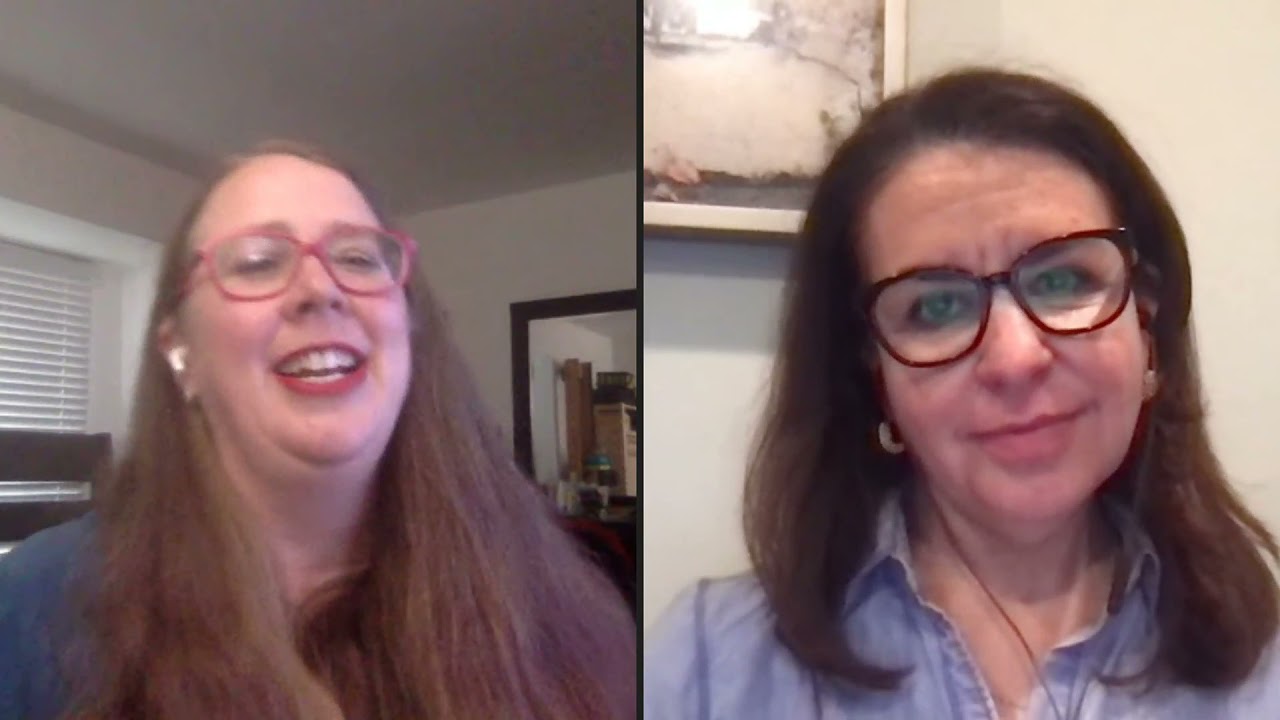 Openness can be fraught for faculty; the classroom has often been a sanctuary of academic freedom and teaching approaches are personal in the strongest sense. In preparing our faculty for the Fall 2020 semester, we, as faculty developers and academic technologists at CNDLS at Georgetown University, were working with faculty who were openly discussing their pedagogy and the limits of their knowledge of digital tools and learning strategies.

The work moved us past knowing “what works” or “what’s possible” (Hutchings, 2000) in using tools into the realm of affective labor (Horthchild, 2012), where we managed a complex interplay of support, emotions, and uncertainty in order to evoke the proper emotions from faculty. To make our expertise on pedagogy and digital tools “stick” (Ahmed, 2010) we worked within our own emotions while fielding the emotions of faculty. But this work, while taxing, has borne fruit: more faculty are embracing open pedagogical practices such as Domains, ungrading (Blum & Kohn, 2020), and flipping the classroom (Talbert, 2017). The presentation will work to uncover the affective labor we have been practicing, ways to acknowledge it, and what joys it can bring.

This discussion focuses around the ways in which various campuses experienced the impact of pandemic on the various tools and platforms they supported on campus with a specific focus on WordPress Mutlisite, although it proves to be a broader conversation around the challenges of shifting not only online, but from synchronous to asynchronous ways of imagining teaching and learning.

Our conference opens with a plenary session: Joy and Care in Open Education in Times of Pandemic. We are delighted to welcome a panel comprising Tuteleni Aseno from Oklahoma State University, Nicolas Garcia, student president at City of Glasgow College, Orna Farrell from Dublin City University and Catherine Stihler, CEO of Creative Commons. We are also looking forward to thought provoking keynotes from Jasmine Roberts, Ohio State University, Laura Gibbs from the Tiny Tales OER Project (formerly University of Oklahoma) and Rajiv Jhangiani from Kwantlen Polytechnic University in British Columbia. 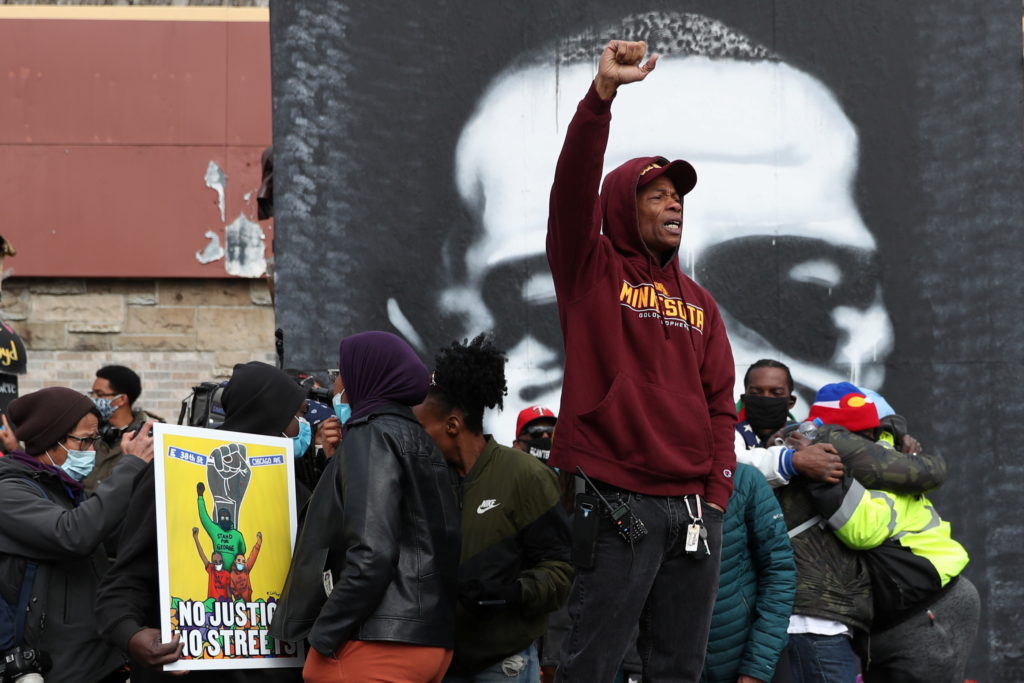 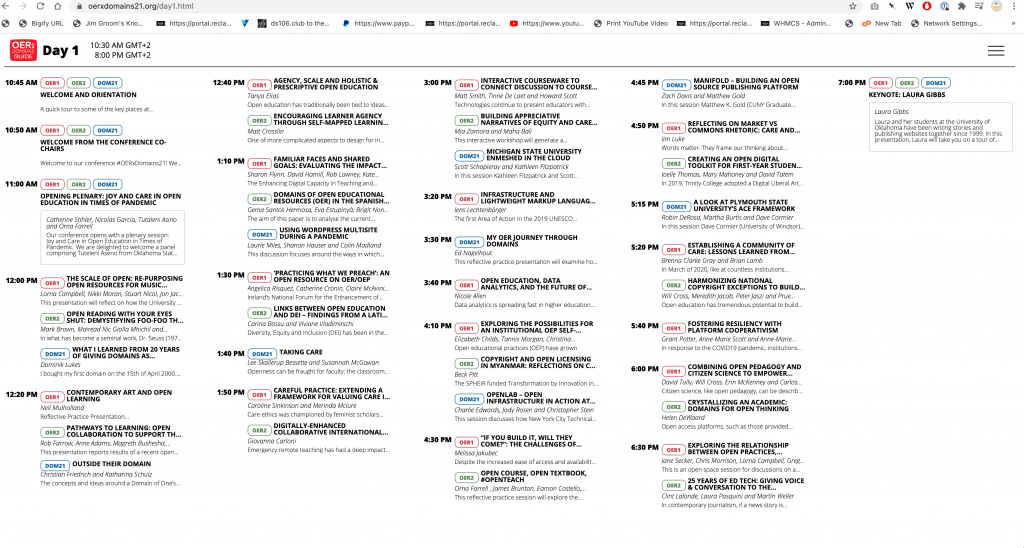 It’s the day before OERxDomains21 and I am blogging, that’s a good sign, I think….regardless, it’s happening! And, given I still have a blog, I have the distinct pleasure to share with you my favorite part of the conference thus far—the TV Guide -inspired program.

to re-phrase a famous line from Zach Davis, “Behind every EDUPUNK is a frazzled web developer.” ❧