If you’re careful with how you deal with the YouTube playback speed settings, you can almost attend all of the three glorious tracks of sessions at WordCamp Santa Clarita Valley before the day is over.
34.177024-118.1024256

WordCamp in Santa Clarita? Yes!
April 3-4, 2020 marks the second annual WordCamp Santa Clarita, the fifth annual Southern California WordPress conference; but who is putting this event on? Meet your local community organizing team — they’ll be here to make your weekend a fun and rewarding experience in a welcoming environment.

Can’t wait! I had a lot of fun at this camp last year and expect it to be even better this year.

Buy your tickets today before they sell out! 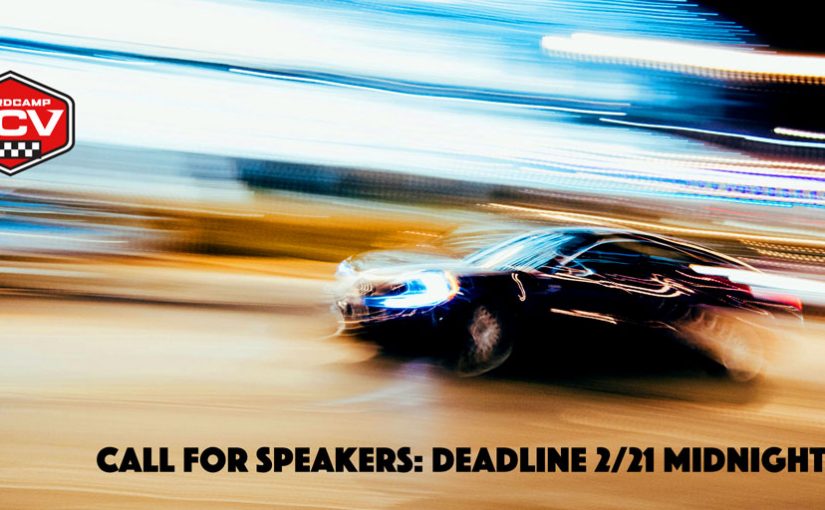 24 HOURS: Held each year in Le Mans, France racers participate in the oldest active sports race testing endurance. You don't need to pull an all-nighter but we would like your @wordcampscv topic ideas submitted by midnight Friday 2/21 (PT). https://t.co/uHFbslgvvM pic.twitter.com/yrMVtY2oMN

Submission sent! Can’t wait to see everyone at camp soon.
34.1778866-118.1017058
WordPress.tv has posted my talk from WordCamp Santa Clarita Valley 2019. If you missed it live, you can review it again now. The slides are available for download as well.

Chris Aldrich provides an overview of the available plugin and endpoint for WordPress and a variety of client applications like Quill, Teacup, OwnYourGram, OwnYour Swarm, Omnibear, that allow one to post status updates, bookmarks, likes, check-ins/location data, photos, and more directly to WordPress sites.
We’ll also talk about how developers can create custom posting interfaces to drastically simplify content creation and posting for clients in ways that can be even simpler than working with Gutenberg.

I was at the awesome WordPress Orange County all day yesterday and attended remotely via live stream for portions of today.

While I was there, my gut feeling after looking at the rest of this year’s calendar was confirmed. I heard from several people that WordCamp Los Angeles and WordCamp San Diego aren’t being planned for this year as they typically would be. Naturally I’m distraught at the thought, but I’m also wondering if part of the reason is that there are several smaller nearby regional camps that have popped up over the past year? Some of these newer camps include WordCamp Riverside, WordCamp Santa Clarita, and the upcoming WordCamp Long Beach.

This trend can be an interesting one in large part because it means that the community is growing in size and sophistication as well as leadership to be able to sustain these new area camps. It’s good to have been able to have gone to two camps within driving distance in the last two months and also know that there are two more camps within that same distance before the end of the year. Instead of having one or two major camps nearby, I’ve now got twice the amount.

Of course, with all the extra awesomeness that this provides, I also wonder about the ideas of community cohesion, leadership, continuity, and even burnout. Should we have better regional conversations about these camps, their timing, and their content? Are we possibly spreading ourselves too thin? Is there enough leadership and continuity to continue all these individual camps on an annual basis for the next 5 years? Are the benches deep enough that we’re not working toward burning ourselves (and our volunteer base) out? Would it be better to have a little less? Should we alternate having bigger camps in LA and San Diego with the smaller ones in nearby cities? What does that look like? Are we thinking about longer term sustainability?

I’m mulling over the idea of spearheading either a WordCamp Los Angeles, to keep the central continuity, but I’m also wondering about doing something like that with a slightly smaller Pasadena Camp. I also started a discussion yesterday about doing a kids’ WordCamp in the LA area when I found out that there is already some organization and institutional support for these in other cities. And of course this all comes with my pre-existing plans for doing a local area IndieWebCamp sometime within the next calendar year. All of these ideas are appealing to me, but I only have a finite amount of time for planning and executing them.

In the coming weeks, I’d like to reach out and touch base with all of these nearby camps to hear other’s ideas on the topic and their long term plans to see what the best way forward might look like. Has the central organization run across these rapid growth problems in other metropolitan areas in the past? What was were the near-term and longer-term results? Without some additional data, I feel like I’m operating in a bit of a vacuum. Is it possible that as a major market city that the LA area is the first to see potential effects like I’ve described?

This post mostly serves as an informal dump of some preliminary ideas and potential concerns for the future; I’d welcome ideas and additional thoughts.

Thank You. You’ll never realize how much April 5 and April 6 meant to our fledgling WordPress Community here in Santa Clarita. Imagine, having your best friends AND the WordPress world descending on our north Los Angeles County valley, sharing twenty-four informative and entertaining sessions, gre...

I really had a grand time at WordCamp Santa Clarita Valley yesterday. I’d like to thank the visionary Joe Simpson, Jr. and his entire group of fantastic organizers and kind volunteers for putting the entire thing together. I couldn’t imagine a better launch for a brand new camp.

College of the Canyons was a fantastic location for the camp and even had some excellent outdoor patio and dining space for lunch.

I do wish I’d been able to make my schedule work out to have been able to attend on Friday. I’m particularly bummed that I didn’t get to see Glenn Zucman’s presentation as he’s always doing some of the most interesting and creative things with WordPress. I’ll wait patiently for WordPress.tv to deliver it for me.

Some of my favorite highlights:

On a more personal level, my two favorite parts included:  Seeing the viceral reactions of a handful of people as the proverbial light switch was turned on when they realized the power and flexibility of the posting interfaces provided by micropub clients during my talk. There was also a palpable rush at the end while using a few minutes of extra time demoing some examples of my website and and the power of Micropub, Webmention, and backfeed along with some other IndieWeb goodness. I’ve already had a number of people following up with additional questions, conversations, and emails.

For those who may have missed them, here is a link to my slides from the Micropub and WordPress talk and a link to some of the bigger pieces I’ve wrtitten about with respect to WordPress and IndieWeb technologies in the past. Naturally, these are only a supplement to the hundreds of others who are working in and documenting the space.

I’ll also give a special thanks to Joseph Dickson for the photo/tweet of me just before the talk:

Dr. Dianne G. Van Hook University Center on the campus of College of the Canyons

Leaving the WordCamp fun to head back home for the night.

The afterparty for WordCamp Santa Clarita was held at Draconum in Newhall
Hanging out with old friends and new at the WordCamp after party.
34.380763-118.529532
Slides for my talk this afternoon on Micropub and WordPress are available here: https://docs.google.com/presentation/d/1988hYI5PIIV4_NRYLUmzcsm0bKTHleQhkYXnffYaQS0/edit?usp=sharing