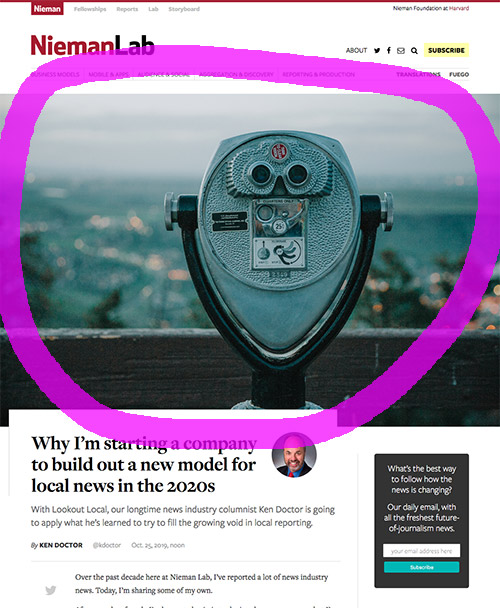 Flickr is a great place to find photos to use. Many photographers assign their photos with a Creative Commons license, so any can use the … Idea: a script to find Flickr photos being used online... Read More »

Clicking through to the photo, there is no mention of this image appearing on this important announcement. Perhaps the author privately contact the photographer about using his image. Since Ken Doctor is so incredible with his media experience (i’m being serious), I’m fairly certain someone from his team would have contacted the photographer to give him a heads up. ❧

I’m sure I’ve said it before, but I maintain that if the source of the article and the target both supported the Webmention spec, then when a piece used an image (or really any other type of media, including text) with a link, then the original source (any website, or Flickr in this case) would get a notification and could show—if they chose—the use of that media so that others in the future could see how popular (or not) these types of media are.

Has anyone in the IndieWeb community got examples of this type of attribution showing on media on their own websites? Perhaps Jeremy Keith or Kevin Marks who are photographers and long time Flickr users?

Incidentally I’ve also mentioned using this notification method in the past as a means of decentralizing the journal publishing industry as part of a peer-review, citation, and preprint server set up. It also could be used as part of a citation workflow in the sense of Maria Popova and Tina Roth Eisenberg‘s Curator’s Code[1]set up, which could also benefit greatly now with Webmention support.
Annotated on March 09, 2020 at 12:18PM

Attributing your source of discovery should never obscure attributing the creator or originator of the content. For instance, if you repost a compelling poster you found on your favorite design blog, first credit the person who designed the poster, and then attribute discovery to the design blog that brought it to your attention.

We’ve proposed two unicode characters for attributing. They’re clean and short, and they help spread the message of The Curator’s Code itself, but they are not the only way to attribute. You can always use words like “via,” or simply hyperlink to your source — the link is the important part.

Part of what The Curator’s Code aspires to do is evolve our thinking about the levels of attribution. “Via” ᔥ tends to denote a direct repost — something you found elsewhere and shared with your audience with little modification or elaboration. “HT” ↬ tends to stand for indirect discovery — something for which you got the idea at your source, but modified or elaborated on significantly when sharing with your audience.

I like the general idea of this website, and if nothing else the definitions. I’ve always wanted a plugin or functionality on my website for doing this more quickly. Sadly the Curator’s Code site is dead and with it the bookmarklet.

and of course, I’ll give this the obligatory:
[ᔥ IndieWeb chat]

I’ve seen the five R’s used many times in reference to the OER space (Open Educational Resources). They include the ability to allow others to: Retain, Reuse, Revise, Remix and/or Redistribute content with the appropriate use of licenses. These are all some incredibly powerful building blocks, but I feel like one particularly important building block is missing–that of the ability to allow easy accretion of knowledge over time.

Some in the educational community may not be aware of some of the more technical communities that use the idea of version control for their daily work. The concept of version control is relatively simple and there are a multitude of platforms and software to effectuate it including Git, GitHub, GitLab, BitBucket, SVN, etc. In the old days of file and document maintenance one might save different versions of the same general file with increasingly different and complex names to their computer hard drive: Syllabus.doc, Syllabus_revised.doc, Syllabus_revisedagain.doc, Syllabus_Final.doc, Syllabus_Final_Final.doc, etc. and by using either the names or date and timestamps on the file one might try to puzzle out which one was the correct version of the file that they were working on.

For the better part of a decade now there is what is known as version control software to allow people to more easily maintain a single version of their particular document but with a timestamped list of changes kept internally to allow users to create new updates or roll back to older versions of work they’ve done. While the programs themselves are internally complicated, the user interfaces are typically relatively easy to use and in less than a day one can master most of their functionality. Most importantly, these version control systems allow many people to work on the same file or resource at a time! This means that 10 or more people can be working on a textbook, for example, at the same. They create a fork  or clone of the particular project to their personal work space where they work on it and periodically save their changes. Then they can push their changes back to the original or master where they can be merged back in to make a better overall project. If there are conflicts between changes, these can be relatively easily settled without much loss of time. (For those looking for additional details, I’ve previously written Git and Version Control for Novelists, Screenwriters, Academics, and the General Public, which contains a variety of detail and resources.) Version control should be a basic tool of every educators’ digital literacy toolbox.

For the OER community, version control can add an additional level of power and capability to their particular resources. While some resources may be highly customized or single use resources, many of them, including documents like textbooks can benefit from the work of many hands in an accretive manner. If these resources are maintained in version controllable repositories then individuals can use the original 5 R’s to create their particular content.

If you’re not sold on the value of version control, I’ll mention briefly that Microsoft spent $7.5 Billion over the summer to acquire GitHub, which is one of the most popular version control and collaboration tools on the market. Given Microsofts’ push into the open space over the past several years, this certainly bodes well for both open as well as version control for years to come.

As a simple example, lets say that one professor writes the bulk of a mathematics text, but twenty colleagues all contribute handfuls of particular examples or exercises over time. Instead of individually hosting those exercises on their own sites or within their individual LMSes where they’re unlikely to be easy to find for other adopters of the text, why not submit the changes back to the original to allow more options and flexibility to future teachers? Massive banks of problems will allow more flexibility for both teachers and students. Even if the additional problems aren’t maintained in the original text source, they’ll be easily accessible as adjunct materials for future adopters.

One of the most powerful examples of the value of accretion in this manner is Wikipedia. While it’s somewhat different in form than some of the version control systems mentioned above, Wikipedia (and most wikis for that matter) have built in history views that allow users to see and track the trail of updates and changes over time. The Wikipedia in use today is vastly larger and more valuable today than it was on its first birthday because it allows ongoing edits to be not only improved over time, but those improvements are logged and view-able in a version controlled manner.

This is another example of an extensible OER platform that allows simple accretion. With the correct settings on a document, one can host an original and allow it to be available to others who can save it to their own Google Drive or other spaces. Leaving the ability for guests to suggest changes or to edit a document allows it to potentially become better over time without decreasing the value of the original 5 Rs.

As many open educational resources are hosted online for easy retention, reuse, revision, remixing, and/or redistribution, keeping them updated with potential changes can potentially be a difficult proposition. It may not always be the case that resources are maintained on a single platform like GitHub or that users of these resources will necessarily know how to use these platforms or their functionality. As a potential “fix” I can easily see a means of leveraging the W3C recommended specification for Webmention as a means of keeping a tally of changes to resources online.

Let’s say Robin keeps a copy of her OER textbook on her WordPress website where students and other educators can easily download and utilize it. More often than not, those using it are quite likely to host changed versions of it online as well. If their CMS supports the Webmention spec like WordPress does via a simple plugin, then by providing a simple URL link as a means of crediting the original source, which they’re very likely to do as required by the Creative Commons license anyway, their site will send a notification of the copy’s existence to the original. The original can then display the webmentions as traditional comments and thus provide links to the chain of branches of copies which both the original creator as well as future users can follow to find individual changes. If nothing else, the use of Webmention will provide some direct feedback to the original author(s) to indicate their materials are being used. Commonly used education facing platforms like WordPress, Drupal, WithKnown, Grav, and many others either support the Webmention spec natively or do so with very simple plugins.

One of the issues some may see with pushing updates back to an original surrounds potential resource bloat or lack of editorial oversight. This is a common question or issue on open source version control repositories already, so there is a long and broad history of for how these things are maintained or managed in cases where there is community disagreement, an original source’s maintainer dies, disappears, loses interest, or simply no longer maintains the original. In the end, as a community of educators we owe it to ourselves and future colleagues to make an attempt at better maintaining, archiving, and allowing our work to accrete value over time.

In summation, I’d like to request that we all start talking about the 6 R’s which include the current 5 along with the addition of a Request update (or maybe pull Request, Recompile, or Report to keep it in the R family?) ability as well. OER is an incredibly powerful concept already, but could be even more so with the ability to push new updates or at least notifications of them back to the original. Having the ability to do this will make it far easier to spread and grow the value of the OER concept as well as to disrupt the education spaces OER was evolved to improve. 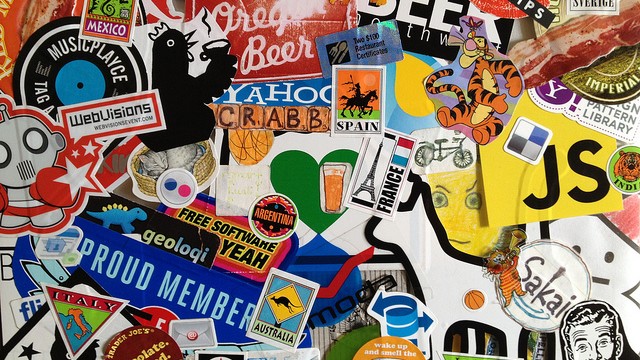 From border crossings to hacking conferences, that Bitcoin or political sticker may be worth leaving on a case at home.

I had a very short conversation at the IndieWeb Summit 2018 in Portland with Nate Angell about the stickers on his laptop. Who knew he was such a subject area expert that Motherboard/Vice was using his material?

Of course this also reminds me that if academics, journalists, and publications/outlets were using webmentions when they credited creative commons articles, photos, audio, or other content, then the originator would get a notification that it was being used. This could also tip the originator off that their licensed content is being properly used.