IT’S GETTING EASIER to secure your digital privacy. iPhones now encrypt a great deal of personal information; hard drives on Mac and Windows 8.1 computers are now automatically locked down; even Facebook, which made a fortune on open sharing, is providing end-to-end encryption in the chat tool WhatsApp. But none of this technology offers as much protection as you may think if you don’t know how to come up with a good passphrase.

in his cryptography/blockchain talk for #Domains19 @poritzj mentioned steganography, so I wanted to share with him, plus with anyone interested in such weirdness, the Latin Steganometrographia for creating cryptographic poetry in Latin: cool, bizarre, fun!https://t.co/5JawIqhbQF pic.twitter.com/jqnJPJZcwh

Preface This is a first draft of a free (as in speech, not as in beer) (although it is free as in beer as well) undergraduate number theory textbook. It was used for Math 319 at Colorado State University – Pueblo in the spring semester of 2014. Thanks are hereby offered to the students in that class — Megan Bissell, Tennille Candelaria, Ariana Carlyle, Michael Degraw, Daniel Fisher, Aaron Griffin, Lindsay Harder, Graham Harper, Helen Huang, Daniel Nichols, and Arika Waldrep — who offered many useful suggestions and found numerous typos. I am also grateful to the students in my Math 242 Introduction to Mathematical Programming class in that same spring semester of 2014 — Stephen Ciruli, Jamen Cox, Graham Harper, Joel Kienitz, Matthew Klamm, Christopher Martin, Corey Sullinger, James Todd, and Shelby Whalen — whose various programming projects produced code that I adapted to make some of the figures and examples in the text.

The author gratefully acknowledges the work An Introductory Course in Elementary Number Theory by Wissam Raji [see www.saylor.org/books/] from which this was initially adapted. Raji's text was released under the Creative Commons CC BY 3.0 license, see creativecommons.org/licenses/by/3.0. This work is instead released under a CC BY-SA 4.0 license, see creativecommons.org/licenses/by-sa/4.0. (The difference is that if you build future works off of this one, you must also release your derivative works with a license that allows further remixes over which you have no control.)

be sure to check out the materials that @poritzj has shared at his website, incl. all you wanted to know about cryptography but were afraid to ask:https://t.co/SdxbbNlNsT
Yet Another Introductory Number Theory Textbook (Cryptology Emphasis Version) — CC-licensed! #Domains19 https://t.co/HsWU5gxvmM

Even if you look really close.

I like this concept of Really, Really, Really used. Reminds me of the value of finding use cases for markup like microformats in the wild as a means of standardizing things or for paving cow paths. 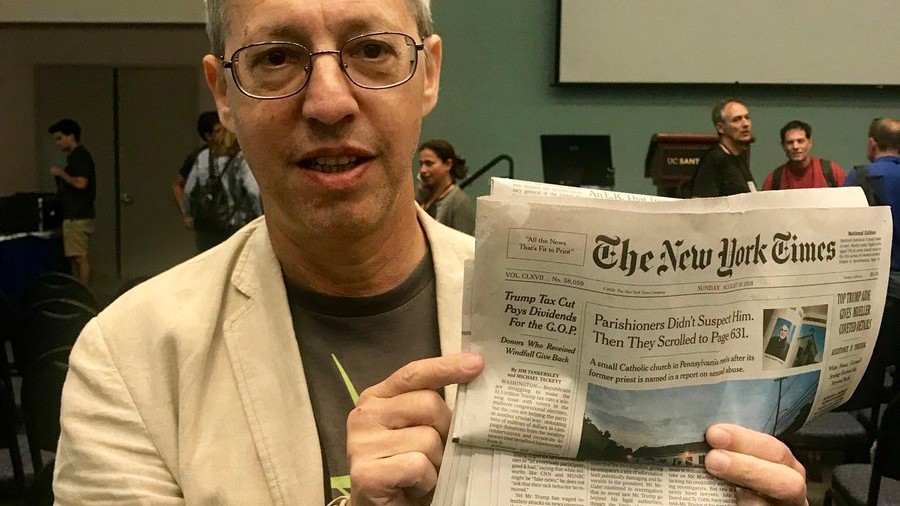 This really gives a new meaning to the “paper of record."

Update: We’ve added comments at the end of the post pointing out that the National Institute of Standards and Technology (NIST) considers an email address to be personally identifiable information or PII. Gravatar is a service that provides users with a profile image that can appear on many sites across the Net. It is integrated with … An interesting piece to be sure, but I’ve thought of doing this sort of steganography in the past. In particular, I recall having conversations with Sol Golomb about similar techniques in the past. I’m sure there’s got to be prior art for similar things as well.

Sometimes it’s the very people who no one imagines anything of who do the things no one can imagine.

–an interesting sentiment repeated through the film

I think this was one of the most interesting moments in the film with a very interesting double entedre:

Of course machines can’t think as people do. A machine is different from a person. Hence, they think differently. The interesting question is, just because something, uh… thinks differently from you, does that mean it’s not thinking? Well, we allow for humans to have such divergences from one another. You like strawberries, I hate ice-skating, you cry at sad films, I am allergic to pollen. What is the point of… different tastes, different… preferences, if not, to say that our brains work differently, that we think differently? And if we can say that about one another, then why can’t we say the same thing for brains… built of copper and wire, steel?

I was a bit worried that this film would miss out on one or two crucial technical details that the wider audience should be at least be made aware. It succeeded in presenting all of them, including the concept of a telegraphic “hand”.

The exertion scenes of Alan running were a bit too on-the-nose for me as a proxy for his mental effort and work, particularly given the rest of the general tenor of his character. It was an interesting cinematic and emotional trick however.

This was an incredibly well put together film. I was far more impressed than I had expected to be.

At Signal, we’ve been thinking about the difficulty of private contact discovery for a long time. We’ve been working on strategies to improve our current design, and today we’ve published a new private contact discovery service. Using this service, Signal clients will be able to efficiently and scalably determine whether the contacts in their address book are Signal users without revealing the contacts in their address book to the Signal service.

There’s a lot of work involved here, but this is an intriguing proposition for doing contact discovery in social media while maintaining privacy. I can’t wait to see which silos follow suit, but I’m even more curious if any adventurous IndieWeb creators will travel down this road?

Private contact discovery for Signal. Make no mistake: what Moxie is doing here is going to revolutionize messaging. https://t.co/RjAMWIpXui

In short: your contact list will no longer be available to Signal servers. If you trust Intel SGX this wipes out a load of info leakage.

The Web Cryptography Working Group has published a W3C Recommendation of the Web Cryptography API. This specification describes a JavaScript API for performing basic cryptographic operations in web applications, such as hashing, signature generation and verification, and encryption and decryption. Additionally, it describes an API for applications to generate and/or manage the keying material necessary to perform these operations. Uses for this API range from user or service authentication, document or code signing, and the confidentiality and integrity of communications.

The Web Cryptography API is a now W3C Recommendation https://t.co/hz97mKXuYH

Our friend Andrew Eckford has spent some time over the holiday improving his Twitter bot Primes as a Service. He launched it in late Spring of 2016, but has added some new functionality over the holidays. It can be relatively handy if you need a quick answer during a class, taking an exam(?!), to settle a bet at a mathematics tea, while livetweeting a conference, or are hacking into your favorite cryptosystems.

Tweet a positive 9-digit (or smaller) integer at @PrimesAsAService. It will reply via Twitter to tell you if the number prime or not.

If you ask about a prime number with a twin prime, it should provide the twin.

Pro tip: You should be able to drag and drop any of the buttons above to your bookmark bar for easy access/use in the future.