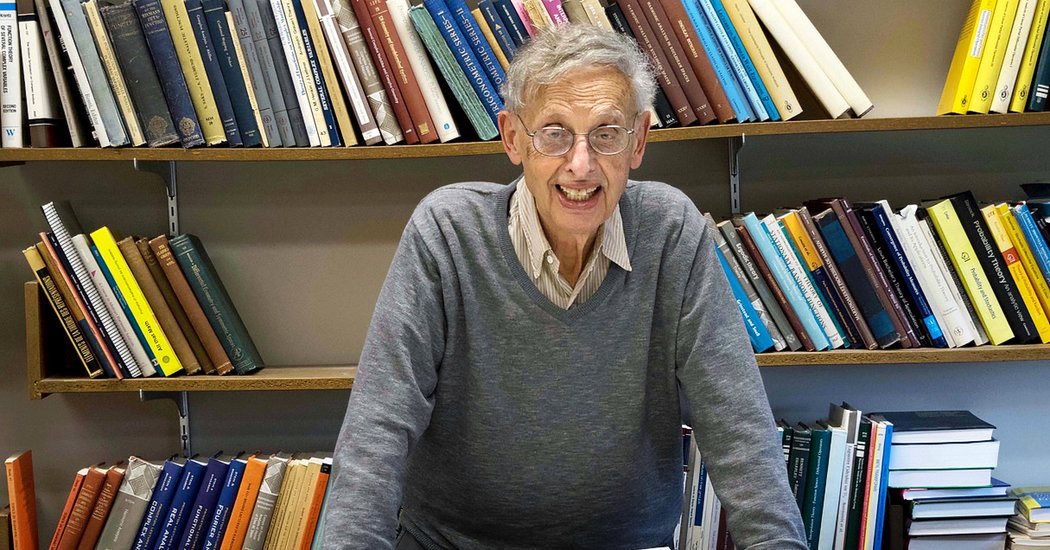 Arriving from Europe with diamonds in his shoes (hidden there), he found renown in his field with real-world applications, like charting a stock market.

How many references to “Diamonds hidden in the soles of shoes” can there be? Suppose this story may have somehow influenced Paul Simon?

A nice overview of some of Stein’s work.

Dr. Mike Miller, who had previously announced a two quarter sequence of classes on Lie Groups at UCLA, has just opened up registration for the second course in the series. His courses are always clear, entertaining, and invigorating, and I highly recommend them to anyone who is interested in math, science, or engineering.

Prior to the first part of the course, I’d written some thoughts about the timbre and tempo of his lecture style and philosophy and commend those interested to take a peek. I also mentioned some additional resources for the course there as well.  For those who missed the first portion, I’m happy to help fill you in and share some of my notes if necessary. The recommended minimum prerequisites for this class are linear algebra and some calculus.

A Lie group is a differentiable manifold that is also a group for which the product and inverse maps are differentiable. A Lie algebra is a vector space endowed with a binary operation that is bilinear, alternating, and satisfies the so-called Jacobi identity. This course is the second in a 2-quarter sequence that offers an introductory survey of Lie groups, their associated Lie algebras, and their representations. Its focus is split between continuing last quarter’s study of matrix Lie groups and their representations and reconciling this theory with that for the more general manifold setting. Topics to be discussed include the Weyl group, complete reducibility, semisimple Lie algebras, root systems, and Cartan subalgebras. This is an advanced course, requiring a solid understanding of linear algebra, basic analysis, and, ideally, the material from the previous quarter.Internet access required to retrieve course materials.

As many may know or have already heard, Dr. Mike Miller, a retired mathematician from RAND and long-time math professor at UCLA, is offering a course on Introduction to Lie Groups and Lie Algebras this fall through UCLA Extension.  Whether you’re a professional mathematician, engineer, physicist, physician, or even a hobbyist interested in mathematics you’ll be sure to get something interesting out of this course, not to mention the camaraderie of 20-30 other “regulars” with widely varying backgrounds (actors to surgeons and evolutionary theorists to engineers) who’ve been taking almost everything Mike has offered over the years (and yes, he’s THAT good — we’re sure you’ll be addicted too.)

Even if it’s been years since you last took Calculus or Linear Algebra, Mike (and the rest of the class) will help you get quickly back up to speed to delve into what is often otherwise a very deep subject.  If you’re interested in advanced physics, quantum mechanics, quantum information or string theory, this is one of the topics that is de rigueur for delving in deeply and being able to understand them better. The topic is also one near and dear to the hearts of those in robotics, graphics, 3-D modelling, gaming, and areas utilizing multi-dimensional rotations. And naturally, it’s simply a beautiful and elegant subject for those who have no need to apply it to anything, but who just want to meander their way through higher mathematics for the fun of it (this will comprise the largest majority of the class by the way.)

Whether you’ve been away from serious math for decades or use it every day or even if you’ve never gone past Calculus or Linear Algebra, this is bound to be the most entertaining thing you can do with your Tuesday nights in the fall.  If you’re not sure what you’re getting into (or are scared a bit by the course description), I highly encourage to come and join us for at least the first class before you pass up on the opportunity.  I’ll mention that the greater majority of new students to Mike’s classes join the ever-growing group of regulars who take almost everything he teaches subsequently. (For the reticent, I’ll mention that one of the first courses I took from Mike was Algebraic Topology which generally requires a few semesters of Abstract Algebra and a semester of Topology as prerequisites.  I’d taken neither of these prerequisites, but due to Mike’s excellent lecture style and desire to make everything comprehensible, I was able to do exceedingly well in the course.) I’m happy to chat with those who may be reticent. Also keep in mind that you can register to take the class for a grade, pass/fail, or even no grade at all to suit your needs/lifestyle.

As a group, some of us have a collection of a few dozen texts in the area which we’re happy to loan out as well.  In addition to the one recommended text (Mike always gives such comprehensive notes that any text for his classes is purely supplemental at best), several of us have also found some good similar texts:

Given the breadth and diversity of the backgrounds of students in the class, I’m sure Mike will spend some reasonable time at the beginning [or later in the class, as necessary] doing a quick overview of some linear algebra and calculus related topics that will be needed later in the quarter(s).

Further information on the class and a link to register can be found below. If you know of others who might be interested in this, please feel free to forward it along – the more the merrier.

I hope to see you all soon.

A Lie group is a differentiable manifold that is also a group for which the product and inverse maps are differentiable. A Lie algebra is a vector space endowed with a binary operation that is bilinear, alternating, and satisfies the so-called Jacobi identity. This course, the first in a 2-quarter sequence, is an introductory survey of Lie groups, their associated Lie algebras, and their representations. This first quarter will focus on the special case of matrix Lie groups–including general linear, special linear, orthogonal, unitary, and symplectic. The second quarter will generalize the theory developed to the case of arbitrary Lie groups. Topics to be discussed include compactness and connectedness, homomorphisms and isomorphisms, exponential mappings, the Baker-Campbell-Hausdorff formula, covering groups, and the Weyl group. This is an advanced course, requiring a solid understanding of linear algebra and basic analysis.

Holy cow! I discovered on Friday that Terence Tao, a Fields Medal winner, will be teaching a graduate level Real Analysis class this fall at UCLA.

Surprisingly, to me, it ony has 4 students currently enrolled!! Having won a Fields Medal in August 2006, this is a true shock, for who wouldn’t want to learn analysis from such a distinguished professor? Are there so few graduate students at UCLA who need a course in advanced analysis? I would imagine that there would be graduate students in engineering and even physics who might take such a course, but perhaps I’m wrong?

Most of his ratings on RateMyProfessors are actually fairly glowing; the one generally negative review was given for a topology class and generally seems to be an outlier.

On his own website in a section about the class and related announcements we seem to find the answer to the mystery about enrollment.  There he says:

I intend this to be a serious course, focused on teaching the material in the course description.  As such, students who are taking or auditing the course out of idle curiosity or mathematical “sightseeing”, rather than to learn the basics of measure theory and integration theory, may be disappointed.  I would therefore prefer that frivolous enrollments in the class be kept to a minimum.

This is generally sound advice, but would even the most serious mathematical tourists really bother to make an attempt at such an advanced course? Why bother if you’re not going to do the work?!

Fans of the Mathematical Genealogy Project will be interested to notice that Dr. Tao is requiring his Ph.D. advisor’s text Real Analysis: Measure Theory, Integration, and Hilbert Spaces. He’s also recommending Folland‘s often used text as well, though if he really wanted to scare off the lookie-loos he could just say he’ll be using Rudin‘s text.