Last October, we announced that we'd partnered with Kickstarter to start a new project to succeed Drip, their subscription platform for independent artists. Unfortunately, we’ve decided to cancel the project, and wanted to talk a little about why.

Joseph explores the extent to which discourses about community suggest an antidote to or escape from capitalism’s depredations, while distracting us from the supplementary role that community actually serves with respect to capital, filling its gaps and smoothing over its rifts in ways that permit it to function untrammeled. The alternative presented by community allows the specter of socialism, or genuine state support for the needs of the public, to be dismissed. This relationship becomes particularly clear in Joseph’s discussion of the role of non-profit organizations — entities highly likely to participate in and benefit from the idealized discourse of community — which often fill needs left behind by a retreating state, allowing that retreat to go unchallenged.

…raises the key question of what it is we mean when we talk about community?
As Miranda Joseph argues in Against the Romance of Community, the concept is often invoked as a place holder for something that exists outside the dominant economic and institutional structures of contemporary life. A set of estensibly organic felt relationships that harken back to a mythical pre-modern moment in which people lived and worked in direct connection with one another  without the mediating forces of capitalism.
Now community is in this sense, in Benedict Anderson’s sense, an imagined relationship, and even an imaginary one. As its invocation is designed to yoke together bodies whose existence as a group is largely constructed. It’s a concept often used both idealistically and as a form of discipline.
A claim of unity that smoothes over and thus suppresses  internal difference and disagreement. And as Joseph points out, the notion of community is often deployed  as if the relationships that it describes could provide an antidote to or an escape from the problems created by contemporary political and economic life.
But this suggestion,  serves to distract us, she says, from the supplementary role that community, in fact, actually serves with respect to capitalism. Sort of filling its gaps and smoothing over its flaws in ways that permit it to function without real opposition. So we call upon the community to support projects  that the dominant institutions of the mainstream economy will not. And this is how we end up with social network-based fundraising campaigns to support people facing major health crises rather than demanding universal health care, and elementary school bake sales rather than full funding for education.
So community becomes, in this sense, an alibi for the creeping privatization of what should be social responsibilities.

Some interesting thought here with respect to economics, community, the commons, and education. While a large piece of the talk is about higher education, there are definitely some things that can be learned and used with respect to social media, and particularly the IndieWeb movement. I’d recommend everyone take a peek at it and think about how we can better deploy and give credit to some of our shared resources. 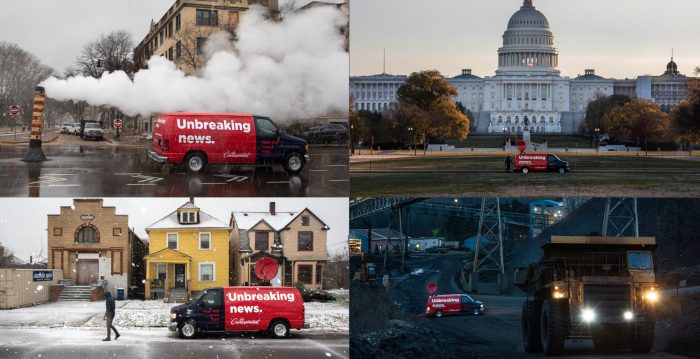 "They're really good at the PR thing, and it really feels like gaslighting. They were like, 'Well, we never promised a U.S. newsroom.' I was like: Wait, did I just imagine all this?"

I remember seeing Jay Rosen’s initial posts and thinking it was an interesting concept. I loved his first podcast interview, but thought it seemed suspicious when no further episodes were done or released, so that by the time the crowd fund came around, my gut said to wait and see what happened. 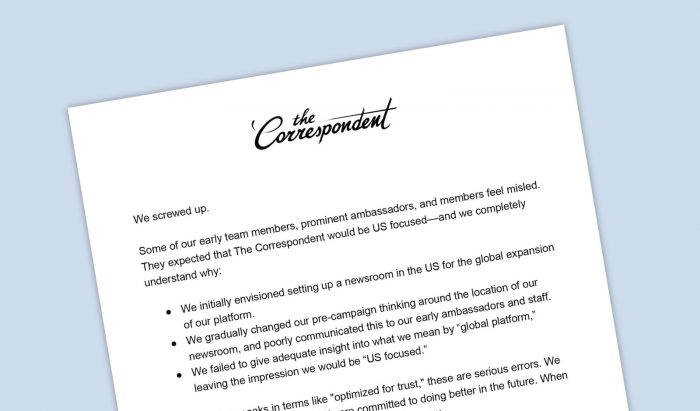 "We screwed up," The Correspondent said in a tweeted statement.

Suspicious that their statement wasn’t actually signed by anyone…

A decision not to have its headquarters in New York or the US, and to base the English-language site in Amsterdam, has drawn criticism from supporters.

A half mea-culpa of sorts for some poor marketing and crowdfunding.

On the morning of October 21, 2017, the budding New York choreographer Jinah Parker was sitting in bed, her husband lying alongside, when she opened her email and found a deeply unsettling, one-paragraph message about her debut dance production.

The show was called SHE, a Choreoplay, an off-off-Broadway interpretative dance in which four women vividly monologize rape and abuse.

Parker wrote and directed. Her newlywed husband, Kevin Powell, was the producer. In 1992, as a tenacious 26-year-old activist, he appeared on the inaugural season of MTV’s genre-defining reality show, The Real World. In the decades since, he’d become a prolific public speaker, author of 13 books, and a two-time congressional candidate.

Powell also has a history of violence. He assaulted women in college and once shoved a girlfriend into a bathroom door. Now he’s a sophist of male fragility, and an essential component of his activist repertoire is to engage in public reflection—usually with equal parts self-effacement and self-righteousness—upon this personal shame.

A great example why hot takes involving coming at people and seemingly outting them without the appropriate research can be terribly dangerous.

It would seem that this couple got just what they had coming to them, though it’s a bit disingenuous that they can go to crowd funding platforms to spread the blame out. I’m hoping that it was only all the people to whom they spread their invective to that ended helping to foot part of their bill.

GoFundMe said Friday that it would refund $20 million raised by more than 300,000 donors for President Trump's border wall after an account aiming to raise $1 billion for the wall changed part of its campaign.

I’m glad that GoFundMe has some protocols in place to prevent screwwy fraud like this.

Activists in Texas have raised thousands of dollars to place an anti-Sen. Ted Cruz (R-Texas) billboard in the state. The creative community is still waiting on Patreon to officially address the new policy of passing transaction fees on to the patrons (backers), but it appears that co-founder and figurehead Jack Conte has been calling some of creators to discuss the situation with them. Jeph Jacques, the cartoonist behind Questionable Content (over 5,300 patrons as of this typing. though the number of patrons as been… fluid… for many Patreon creators in the last few days) tweeted about his conversation with Conte

Perhaps coincidentally, there was a session at IndieWebCamp Austin yesterday (12/09/17) entitled Payments, Pledges, and Donations, Oh My!. The link includes the video of the session via YouTube as well as notes.

The premise is that many creators already have their own websites/platforms for promoting or featuring their work. In some sense Patreon is only bringing a payment gateway (and apparently not a great one) as their sole feature. The conversation within the session was geared toward attempting to make it easier and simpler for creators to not only host their own work, but to accept payments and recurring payments directly. Some of the discussion was geared at making the payments systems seamless so that one could move them from one platform to another without losing hard won supporters and needing to start over again.

While we’re still in the very early days for improving the technology for this, hopefully some of the demos coming out of the camp later today will move the ball forward. Those should be posted on the IndieWeb YouTube channel later today as well.

For those looking for alternates (and particularly when they’ve already got their own websites), I suspect it’ll definitely be worth a look. Alternate platforms and methods were certainly discussed. The means of control for creators to inexpensively keep all of their workflow in-house is very near.