Some interesting resources for music, audio, and video from the Library of Congress mentioned early this morning at IAnno21.
The American Religious sounds site has some interesting UI examples of embedding sound into text within a website. I love the way they’re mixing text and sound.

Have you listened to a recent podcast that made you jump up on excitement saying “everyone should listen to this”?

Even if not, recommend a compelling podcast episode that would be meaningful to other Ontario Extenders.

Since this #oextend is in the curator series, I’ll turn it on it’s ear to recommend my own faux cast. It’s a self-curated list of all the podcasts and audio that I’ve actually listened to and frequently comment on. Here’s the feed for it if you want to subscribe.

Many people recommend podcasts to me, but I suspect that the majority of the time, they’re just parroting back what’s popular or they’ve heard about recently. Listening to podcasts is often work and takes some effort in investing one’s time. As a result, just knowing what podcasts people have actually listened to is very valuable. If it wasn’t good, interesting, or entertaining, they’d have switched the channel. If they listened and actively chose to share it, it must be even better.

If anyone is interesting in building and sharing their own faux-cast, I’m happy to help them do something similar on their own website.

Of course if you want the more “traditional” answer, there are lots of awesome podcasts about which I think, “Everyone should listen to this!” John Biewen’s Seeing White is one of my favorites. Thanks to modern cloud services, the cost of storing and serving content on the internet is incredibly cheap in 2018. With a podcasting platform like Anchor, there is no need for podcasters to pay anymore. So why are traditional podcast companies still charging creators to host files like it’s 2008?

He’s definitely got a major business behind this pitch, and he’s pitching people awfully hard to get them to give away all of their data for a “free” product. There’s the old adage though, “when the product is free, you’re the product.”

I’ve had friends online who’ve noted that this is at least the third time that Anchor.fm has “pivoted”, always seemingly to a larger and larger audience. I find myself wondering when the company is going to finally eat itself? Given that their product seems to change every six months or so, I also wonder if they last another 6 months?

Apparently he’s so bought into the idea of not owning your own data, that at least he’s posting this on one of the worst social silos out there. Just give it all away.

Highlight interesting parts of a video on a timeline with interactive comments, pictures, links, maps, other videos, and more.

This tool reminds me of a somewhat more commercialized version of Jon Udell’s Clipping tools for HTML5 audio, HTML5 video, and YouTube. I wonder if this is the sort of UI that Hypothes.is might borrow? I can definitely see it being useful functionality in the classroom. 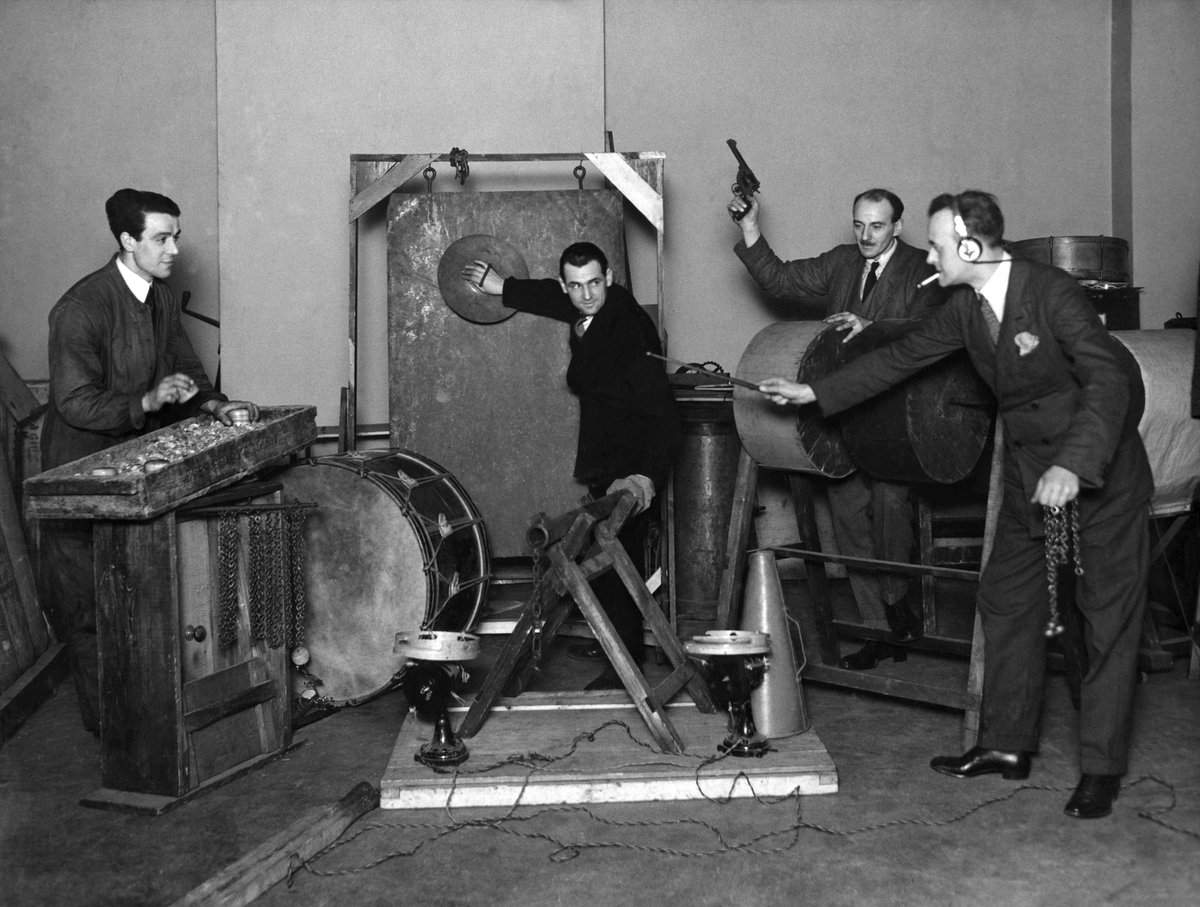 These 16,000 BBC Sound Effects are made available by the BBC in WAV format to download for use under the terms of the RemArc Licence. The Sound Effects are BBC copyright, but they may be used for personal, educational or research purposes, as detailed in the license.

Access dataset metadata by visiting our dedicated LOD site. If you have any queries regarding usage, please contact jake.berger at bbc.co.uk

Because everyone should be able to hear what a Creed tape-printing telegraph sounds like when it’s operating (c.1928-1952).

Over 16,000 classic BBC Archive sound effects and field recordings, from air raids to zebras, are available on the BBC Sound Effects Beta: https://t.co/pO6Ke42yz8

FREE to listen or download and reuse for non-commercial purposes. pic.twitter.com/SWg17zDg6S Text, as the Hypothesis annotation client understands it, is HTML, or PDF transformed to HTML. In either case, it’s what you read in a browser, and what you select when you make an annotation. What’s the equivalent for audio and video? It’s complicated because although browsers enable us to select passages of text, the standard media players built into browsers don’t enable us to select segments of audio and video. It’s trivial to isolate a quote in a written document. Click to set your cursor to the beginning, then sweep to the end. Now annotation can happen. The browser fires a selection event; the annotation client springs into action; the user attaches stuff to the selection; the annotation server saves that stuff; the annotation client later recalls it and anchors it to the selection. But selection in audio and video isn’t like selection in text. Nor is it like selection in images, which we easily and naturally crop. Selection of audio and video happens in the temporal domain. If you’ve ever edited audio or video you’ll appreciate what that means. Setting a cursor and sweeping a selection isn’t enough. You can’t know that you got the right intro and outro by looking at the selection. You have to play the selection to make sure it captures what you intended. And since it probably isn’t exactly right, you’ll need to make adjustments that you’ll then want to check, ideally without replaying the whole clip.

Jon Udell has been playing around with media fragments to create some new functionality in Hypothes.is. The nice part is that he’s created an awesome little web service for quickly and easily editing media fragments online for audio and video (including YouTube videos) which he’s also open sourced on GitHub.

I suspect that media fragments experimenters like Aaron Parecki, Marty McGuire, Kevin Marks, and Tantek Çelik will appreciate what he’s doing and will want to play as well as possibly extend it. I’ve already added some of the outline to the IndieWeb wiki page for media fragments (and a link to fragmentions) which has some of their prior work.

I too look forward to a day where web browsers have some of this standardized and built in as core functionality.

This selection tool has nothing intrinsically to do with annotation. It’s job is to make your job easier when you are constructing a link to an audio or video segment.

I’m reminded of a JavaScript tool written by Aaron Parecki that automatically adds a start fragment to the URL of his page when the audio on the page is paused. He’s documented it here: https://indieweb.org/media_fragment

(If I were Virginia Eubanks I might want to capture the pull quote myself, and display it on my book page for visitors who aren’t seeing it through the Hypothesis lens.)

Of course, how would she know that the annotation exists? Here’s another example of where adding webmentions to Hypothesis for notifications could be useful, particularly when they’re more widely supported. I’ve outlined some of the details here in the past: http://boffosocko.com/2016/04/07/webmentions-for-improving-annotation-and-preventing-bullying-on-the-web/

Create your own podcast: find links to audio files on the Web; huffduff the links (add them to your podcast); subscribe to podcasts of other found sounds.

I tell almost everyone I know who’s into web audio and podcasts how much I love Huffduffer.

While the site does a pretty good job of describing itself and the fact that it has a wonderful bookmarklet, I’ll also point out that Ryan Barrett has a video bookmarklet for it that  “extracts the audio from videos on YouTube, Vimeo, and many more sites and sends it to Huffduffer.”

If you’re a podcastaphile, it’s a de rigueur tool. While I publish a listen feed on my website, you can also follow me on Huffduffer if you wish. If you’re using it, do let me know so I can add you to my “collective”. This will let me find the great audio you’re discovering.

I should tell Jeremy Keith more often I love that he runs this little service: Thanks for making the world so much brighter!

Originally, I just browsed for new stuff by scrolling through the top picks list on the iTunes Podcasts app. But that was time consuming. After trying out the search functionality on the app, I wished I could search a little better. I decided to look for other resources that I could use to further dial in my selections. Turns out there are some pretty good websites/apps out there to help you do just that. Here are a few of the best ones I’ve found.

My thoughts on what the article leaves out:

For podcast discovery, I love using Huffduffer. It has a simple browser bookmarklet which allows you to bookmark audio to listen to later and creates iTunes or other feeds you can quickly and easily subscribe to on most of the major podcatchers.

Even better it allows you to search for topics and people. Almost everything on the site (including individuals and even the lists of people you’re following) has audio RSS feed as well as other subscription services that you can subscribe directly to. Love Elvis? Search, subscribe, and listen.

As an example, want to know what I’ve been listening to? Check out my feed where you can see a list, listen to it directly, or even subscribe.

END_OF_DOCUMENT_TOKEN_TO_BE_REPLACED

Papa Fred re-enacting a photo from more than 40 years ago.

A great way to make an entrance to a room: with Mariachis!

I caught some audio of the singing of Happy Birthday as well as a serenade by the Mariachis at Mijares. Apologies in advance for the poor audio quality in a relatively loud and busy room, but it’ll give a small flavor and reminder of the party

I just ran across a recommendation for an audio discovery app via Mathew Ingram at the end of This Week in Google #389.

60db seems like the start of what could be an interesting podcast/audio discovery app/engine. It has the appearance of wanting to be like Nuzzel for the audio space based on their announcement, but isn’t quite there yet based on my quick look through their site. On first blush it doesn’t seem much better than Huffduffer and doesn’t have a follower model of any sort, but perhaps that could change. Folks watching the podcasting and audio discovery space should keep an eye on it though.

Sadly, at least for now, the app appears to focus on short form audio (3-8 minutes in length) from major media content producers who are already syndicating audio in podcast format. I haven’t used the iOS (no Android app yet) app, but the web interface allows one to pick from a list of about 20 broad category options (news, sports, politics, kids, etc.) to “customize” one’s feed.

Hopefully in the future it may build itself out a bit more like Nuzzel by requesting data from one’s Facebook or Twitter feeds to better customize an algorithmic feed for better general audio discovery. Maybe it will allow a follower model based on social graph for improved discovery. One might also like to see custom settings for podcast story length, so one could choose between short hit audio, which they currently have in abundance, and longer form stories for lengthier commute times.

For the moment however, they seem to have recreated a slightly better and more portable version of news radio for the internet/mobile crowd. Perhaps future iterations will reveal more?
​​​