This morning I launched the Kickstarter project for Micro.blog. Really happy with the response. Thank you, everyone!

Manton, I’ve been following your blog and your indieweb efforts for creating a microblogging platform for a while. I’m excited to see your Kickstarter effort doing so well this afternoon!

As a fellow IndieWeb proponent, and since I know how much work such an undertaking can be, I’m happy to help you with the e-book and physical book portions of your project on a voluntary basis if you’d like. I’ve got a small publishing company set up to handle the machinery of such an effort as well as being able to provide services that go above and beyond the usual low-level services most self-publishing services might provide. Let me know if/how I can help. 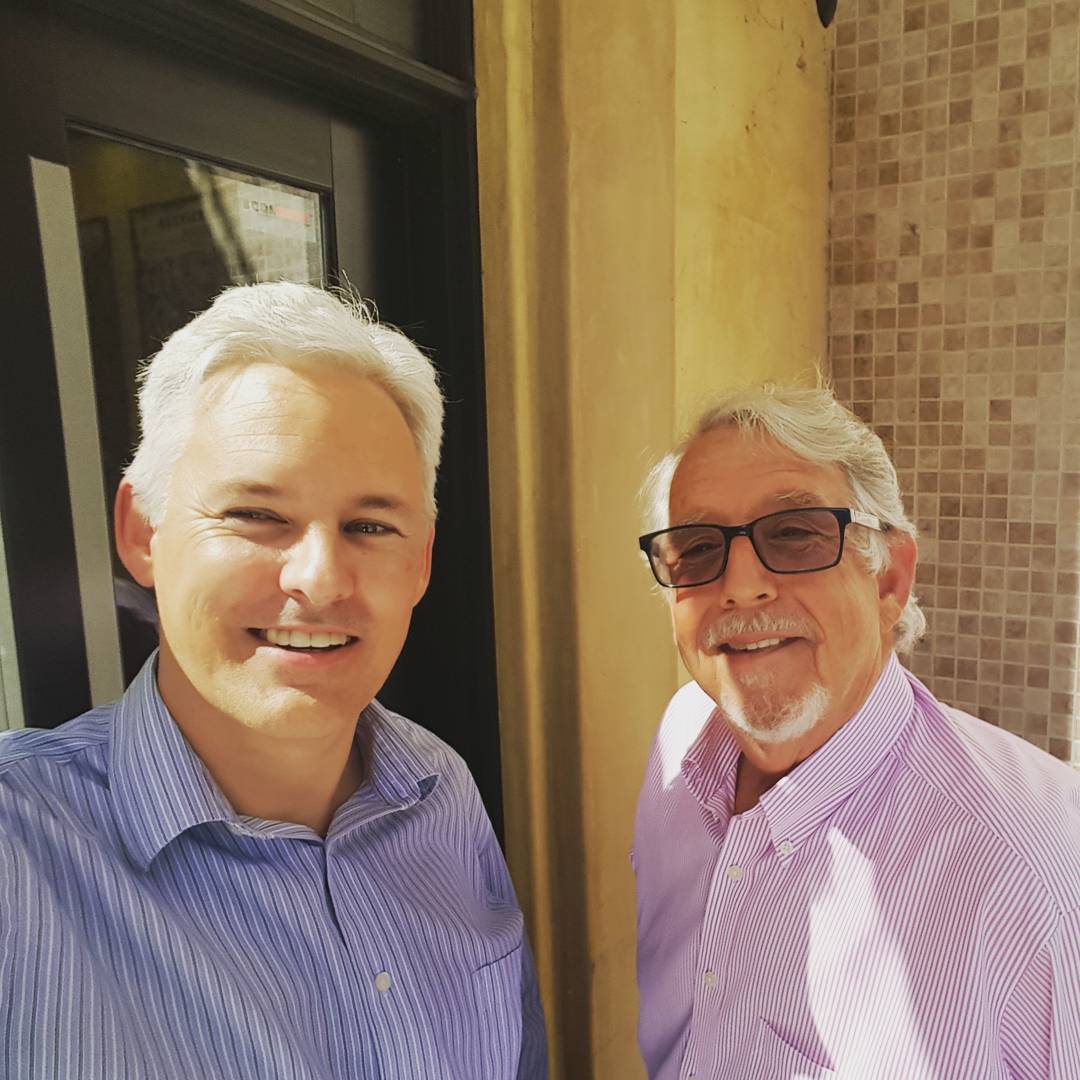 Photo taken at: Porta Via

I had lunch today with author Henry James Korn who revealed big chunks of the plot of his upcoming novel Zionista to me. I should be getting a copy of the first draft to read over the weekend, and I can’t wait. It sounds like it continues the genius of his political satire in Amerikan Krazy.

“Amerikan Krazy: Life Out of Balance” takes part of its name from the new book <a href="http://boffosockobooks.com/books/authors/henry-james-korn/amerikan-krazy/">"Amerikan Krazy”</a> by <a href="http://www.henryjameskorn.com">Henry James Korn</a>. From 2008 to 2013, Korn worked at the Orange County Great Park. He was responsible for the creation of the Palm Court arts complex and culture, music, art and history programs.<br /><br /> “The book is very much about total corporate control of public and private space,” Korn said. The story follows a wounded Marine veteran haunted after having missed the chance to assassinate a presidential candidate who later causes massive human suffering and wreaks havoc on America’s wealth and democracy.<br /><br /> It’s a way of understanding what’s happening in politics now, Korn said.<br /><br /> “Because if ever there was a recognition that our public life and politics have gone crazy, it’s this moment.”

If you haven’t manage to make it down, this exhibition is running for another week at BC Space!

Part of my plans to (remotely) devote the weekend to the IndieWeb Summit in Portland were hijacked by the passing of Muhammad Ali. Wait… What?! How does that happen?

A year ago, I opened started a publishing company and we came out with our first book Amerikan Krazy in late February.  The author has a small backcatalogue that’s out of print, so in conjunction with his book launch, we’ve been slowly releasing ebook versions of his old titles. Coincidentally one of them was a fantastic little book about Ali entitled Muhammad Ali Retrospective, so I dropped everything I was doing to get it finished up and out as a quick way of honoring his passing.

But while I was working on some of the minutiae, I’ve been thinking in the back of my mind about the ideas of marginalia, commonplace books, and Amazon’s siloed community of highlights and notes. Is there a decentralized web-based way of creating a construct similar to webmention that will allow all readers worldwide to highlight, mark up and comment across electronic versions of texts so that they can share them in an open manner while still owning all of their own data? And possibly a way to aggregate them at the top for big data studies in the vein of corpus linguistics?

I think there is…

However it’ll take some effort, but effort that could have a worthwhile impact.

I have a few potential architectures in mind, but also want to keep online versions of books in the loop as well as potentially efforts like hypothes.is or even the academic portions of Genius.com which do web-based annotation.

If anyone in the IndieWeb, books, or online marginalia worlds has thought about this as well, I’d love to chat.

Via @henryjameskorn: “Fortunately I spent a long time many years ago writing an entire book about “The Greatest” because today I’m not sure I’ve got the words.

A few cartons of the hardcover of Amerikan Krazy arrived today for the book launch at Chevalier’s Books next Wednesday!

I took a quick photo series of the unboxing of the copies.

If you haven’t RSVP’d for the reading and book signing, there’s still some room left. Please RSVP at Boffo Socko Books or on Facebook. I hope to see everyone at Chevalier’s Books on Wednesday at 7pm.

Can’t wait for Wednesday or want to read it before the book signing? You can buy the hardcover or e-book version on Amazon or wherever fine literature is sold.

So, I’m publishing my first book. Not a book I wrote, mind you, but a book for which I’m the actual publisher…

We’re throwing a party at Chevalier’s in Los Angeles to celebrate it. Henry James Korn, a brilliant writer—so good that I went to the trouble of publishing it myself rather than just selling it, as I’ve done so often in the past—will be doing a reading and signing on March 2nd. I hope you can all join us!

RSVP via Facebook or directly at <a href=”http://boffosockobooks.com/books/authors/henry-james-korn/amerikan-krazy/#appearances”” target=”_blank”>Boffo Socko Books.

If you have to miss the launch, you may be able to catch one of his other <a href=”http://boffosockobooks.com/books/authors/henry-james-korn/amerikan-krazy/#appearances”” target=”_blank”>upcoming book signings.

Many of you may have already heard, but I’m publishing books under the Boffo Socko Books imprint and our first release, a satirical novel entitled Amerikan Krazy written by Henry James Korn, is being put out on February 22, 2016, just in time to “celebrate” the race for the Presidential Election of 2016.

You can sign up for the giveaway by January 15, 2016 at GoodReads.com.

See the giveaway details
at Goodreads.

We hope our friends will take a moment to register for a free GoodReads account and spend a moment to indicate that they “want to read” the book, and “follow Henry” there as an author.

If you have a moment, and feel so inclined, feel free to share a link to this post on your favorite social media outlet. Your help in spreading the word is greatly appreciated.

Members of the press, reviewers, and book bloggers can request ARC/ARE copies directly.

The more I read of Henry James Korn‘s work, the more I love both it and him.  Nothing pleases or honors me more than to be part of the process of not only re-releasing several of his prior works, but to be part of the team releasing his debut novel. Toward that end, I’m happy to announce (on what I hope to be his best birthday yet) the availability to pre-order his forthcoming novel Amerikan Krazy on Amazon.com! If anyone loves it half as much as I do, it’s guaranteed to be a best seller.

I’ve helped him to edit and shape it for several months now and somehow never tire of reading his characters, his plot, or re-experiencing his never-ending wit or his truckloads of snark. Somehow, between the two of us, I think I’m always getting the better end of the deal in working on his book.  Either way I’m proud to call him my friend.

ack in the late sixties, my friend Henry James Korn wrote an experimental and formally innovative work of fiction entitled The Pontoon Manifesto.

It’s had various print incarnations, some better than others in terms of relaying the intended meaning of his experiment. Forty-five years on, we are truly proud to present a new and unlimited edition electronic Pontoon powered by a web-based randomizer which reorders the paragraphs at the click of a button. This gives The Pontoon Manifesto new life in a technological form unavailable at the time of its writing.

For the Print Purists

In 1975, his experiment was reprinted by the poet Larry Zirlin as a limited edition artist book in the form of a deck of cards to be shuffled and read in any order.  This may be one of the best ways to read the manifesto, and limited copies of this original collector’s edition are still available — drop us a note if you are interested in acquiring a numbered/lettered and signed copy. Physical copies should also be available on Amazon.com shortly as well.

We would love to have your reviews and thoughts once you’ve had the chance to check out the new “manifesto.”  Feel free to post them on GoodReads.com at your leisure.  Additional information about The Pontoon Manifesto including selected exhibitions, selected collections, and its publication history can be found here: The Pontoon Manifesto.

‘Thirty-three fictional beginnings to be shuffled and read in any order?’  I did it and I’m hooked.
-Alexandra Garrett, NewLetters, Beyond Baroque Foundation Los Angeles, 1975

Korn’s persona is a latter-day Huck Finn on his raft riding out of yesterday into today, graduating from innocence to the no-sense world of Tanguy, Ernst, Dali and Kafka.  This post-McLuhan Shandyesque card-read, play-book  is elegant, whimsical, politically satirical and truly surreal.
-Arlene Zekowski, Small Press Review, Dustbooks, Paradise, California, 1975

The Pontoon Manifesto can be read as many ways as it can be shuffled, creating a new plot with every reading.  In trusting his reader to create the fiction, Korn appears to believe my mind contains as many interesting possibilities as his own.
-Tom Montag, Learning to Read Again: Some Notes on Eight Recent Books, Cat’s Pajama Press, Chicago, 1976

The Pontoon Manifesto electronic web edition was designed by Chris Aldrich of  Boffo Socko Books who deployed a web-based randomizer which reorders the paragraphs endlessly at the click of a button.

For its 45th anniversary, we are truly proud to present a new and unlimited edition electronic Pontoon powered by a web-based randomizer which reorders the paragraphs at the click of a button.